After I got the Google sign-in working well enough for my Rails practice web app, the first order of business was to build the basic skeleton. This was a great practice exercise to take the pieces I learned in the Ruby on Rails Tutorial sample app and build something of my own design.

The initial pass implemented basic functionality but it didn’t look very appealing. I had focused on the Rails server-side code and left the client-side code simple plain HTML that would have been state-of-the-art in… maybe 1992?

Let’s make it look like something that belongs in 2017.

The Rails tutorial sample app used Bootstrap to improve the appearance and functionality of the client-side interface. I decided to take this opportunity to learn something new instead of doing the same thing. Since I’m using Google Sign-In in this app, I decided to adopt Google’s design concepts to my client-side appearance as well.

Web being the web, I knew I wouldn’t have to start from scratch. I knew about Google’s own Material Lite and thought that would be a good candidate before I learned it had been retired in favor of its successor, Material Components for the web. One of the touted advantages was improved integration with different web platforms. Sadly Rails was not among the platforms with examples ready-to-go.

I looked around for an existing project to help Rails projects adapt Google’s design language, and that’s when I found Materialize: A library that shares many usage patterns with Bootstrap. The style sheets are even written using SASS, native to default Rails apps, making for easy integration. Somebody has done that work and published it as Ruby gem materialize-sass, so all I had to do was add a single line to use Materialize in my app.

Of course I still had to put in the effort to revise all the view files in my web app to pick up Materialize styling and features. That took a few days, and the reward for this effort is a practice web app which no longer look so amateurish.

In the seemingly never-ending bad news of security breaches, a recurring theme is “they knew how to prevent this, but they didn’t.” Usually in the form of editorializing condemning people as penny-pinching misers caring more about their operating cost than the customer.

The accusations may or may not be true, it’s hard to tell without the other side of the story. What’s unarguably true is that security has some cost. Performing encryption obviously takes more work than not doing any! But how expensive is that cost? Reports range wildly anywhere from less than 5% to over 50%, and it likely depends on the specific situations involved as well.

I really had no idea of the cost until I stumbled across the topic in the course of my own Rails self-education project.

I had designed my Rails project with an eye towards security. The Google ID login token is validated against Google certificates, and the resulting ID is salted and hashed for storage. The code for this added security were deceptively minor, as they triggered huge amounts of work behind the scenes!

I started on this investigation because I noticed my Rails test suite ran quite slowly. Running the test suite for the Rails Tutorial sample app, the test framework ran through ~120 assertions per second. My own project test suite ran at a snail’s pace of ~12 assertions/second, 10% of the speed. What’s slowing things down so much? A few hours of experimentation and investigation pointed the finger at the encryption measures.

Obviously security is good for the production environment and should not be altered. However, for the purposes of development & test, I could weaken them because there would be no actual user data to protect. After I made a change to bypass some code and reducing complexity in others, my test suite speed rose to the expected >100 assertions/sec.

Granted, this is only an amateur at work and I’m probably making other mistakes doing security inefficiently. But as a lesson to experience “Security Has A Cost” firsthand it is eye-opening to find a 1000% performance penalty.

For a small practice exercise app like mine, where I only expect a handful of users, this is not a problem. But for a high-traffic site, having to pay ten times the cost would be the difference between making or breaking a business.

While I still don’t agree with the decisions that lead up to security breaches, at least now I have a better idea of the other side of the story.

Recently, web site security breaches have been a frequent topic of mainstream news. The technology is evolving but this chapter of technology has quite some ways to go yet. Learning web frameworks gives me an opportunity to understand the mechanics from web site developer’s perspective.

For my project I decided to use Google Identity platform and let Google engineers take care of identification and authentication. By configuring the Google service to retrieve only basic information, my site never sees the vast majority of personally identifiable information. It never sees the password, name, e-mail address, etc.

All my site ever receives is a string, the Google ID. My site uses it to identify an user account. With the security adage of “what I don’t know, I can’t spill” I thought this was a pretty good setup: The only thing I know is the Google ID, I can’t spill anything else.

Which led to the next question: what’s the worst that can happen with the ID?

I had thought the ID is something Google generated for my web site. More specifically my site’s Client ID. I no longer believe so. A little experimentation (aided by a change in Client ID for the security issue previously documented) led me to now believe it’s possible the Google ID is global across all Google services.

This means if a hacker manages to get a copy of my site’s database of Google ID, they can cross-reference to databases of other compromised web sites. Potentially assembling a larger picture out of small pieces of info.

While I can’t stop using Google ID (I have to have something to identify an user) I can make it more difficult for a hacker to cross-reference my database. I’ve just committed a change to hash the ID before it is stored in the database. Salted with a value that is unique per deployed instance of the app.

Now for a hacker to penetrate the identity of my user, they must do all of the following:

None of which are impossible, but certainly a lot more effort than it would have otherwise taken.

I think this is a worthwhile addition.

In the previous experiment with AWS, things were relatively straightforward: The bucket name is going to be public, all the access information are secret, and none of them are ever exposed to the user. Nor are they checked into the source code. They are set directly on the Heroku server as environment variables.

Implementing a web site using Google Identity got into a murky in-between for the piece of information known as the client ID. Due to how the OAuth system is designed, the client ID has to be sent to the user’s web browser. Google’s primary example exposed it as a HTML <meta> tag.

Oops! According to this section of the Google Developer Terms of Service document, that was bad. See the sections I highlighted in bold:

Looks like we have a “secret but not secret” level going on: while the system architecture requires that the client ID be visible to an user logging on to my site, as a developer I am still expected to keep it secret from anybody just browsing code online.

How bad was this mistake? As far as security goofs go, this was thankfully benign. On the Google developer console, the client ID is restricted to a specific set of URIs. Another web site trying to use the same client ID will get an error: 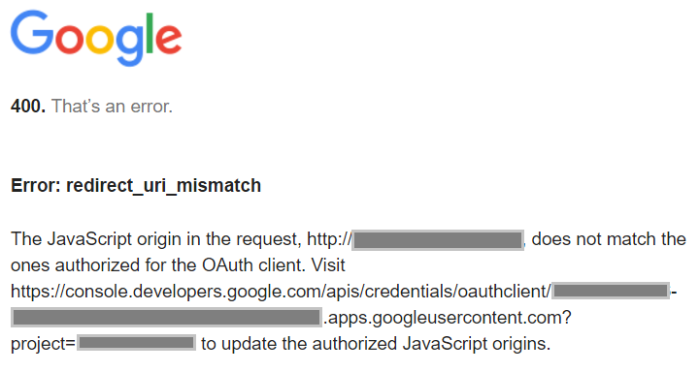 IP addresses can be spoofed, of course, but this mitigation makes abuse more difficult.

After this very instructional detour, I updated my project’s server-side and client-side code to retrieve the client ID from an environment variable. The app will still end up sending the client ID in clear text to the user’s web browser, but at least it isn’t in plain sight searchable on Github.

And to close everything out, I also went into the Google developer console to revoke the exposed client ID, so it can no longer be used by anybody.

The latest chapter comes courtesy of the Google Identity Platform. For my next Rails app project, I decided to venture away from the user password authentication engine outlined in the Hartl Ruby on Rails Tutorial sample app. I had seen the “Sign in with Google” button on several web sites (like Codecademy) and decided to see it from the other side: Users for my next Rails project will sign in with Google!

The client-side code was straightforward following directions in the Google documentation. The HTML is literally copy-and-paste, the JavaScript needed some reworking to translate into CoffeeScript for the standard Rails asset pipeline but wasn’t terribly hard.

The server side was less straightforward.

I started with the guide Authenticate with a Backend Server which had links to the Google API Client Library for (almost all) of the server side technologies including Ruby. The guide page itself included examples on using the client library to validate the ID token in Java, Node.JS, PHP, and Python. The lack of Ruby example would prove problematic because each flavor of the client library seems to have different conventions and use different names for the functionality.

Different, but they’re all in a similar vein of “verify”, “id”, and “token” so I searched the Ruby Google API client library documentation for those keywords in the name. After a few fruitless hours I concluded what I wanted wasn’t there.

Where to next? I went to the library’s Github page for clues. I had to wade through a lot of material irrelevant to the immediate task because the large library covers the entire surface of Google services.

I thought I had hit the jackpot when I found reference to the Google Auth Library for Ruby. It’s intended to handle all authentication work for the big client library, with the target completion date of Q2 2015. (Hmm…) Surely it would be here!

After too many wrong turns, I looked at Signet in detail. It has a OAuth2::Client class, which sounded very similar to the other libraries, but it had no “verify” method so every time I see a reference to Signet I keep deciding to look elsewhere. Once I decided to read into the details of Signet::OAuth2::Client, I finally figured out that it had a decoded_id_token method that can optionally verify the token.

So it had the verification feature but the keyword “verify” itself wasn’t in the name, throwing off my search multiple times.

Nothing to do now but to take some deep breaths, clear out the pent-up frustration, and keep on working…