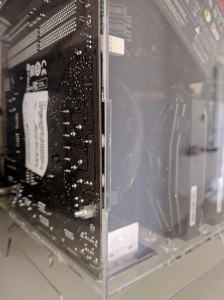 Before diving into building FreeNAS box #2, I thought I’d take a pause and take a closer look at the acrylic construction results of experiment #1. This is purely about learning to build structures from acrylic – independent from the positive or negative aspects of the project as a computer enclosure.

Since laser cutting acrylic is a fairly popular construction technique, there is a wealth of information on the internet. (To be taken with the usual grain of salt.) After getting some first-hand experience I now have context to better understand the information people have shared online. My favorite single page so far is on Makezine. After reading some of these again (with better understanding due to the new experience) I re-evaluated my design and decided my corners are bad.

For the corners of the enclosure, I had designed tongues for one panel to fit into another. On the upside, this helped with aligning pieces for assembly. On the downside, it made the design more complex to draw up and arrange. And even when well joined with acrylic cement, it is an visually unsightly interruption in the clean clear joint.

Even worse, this has introduced stress points that would otherwise not been there. As I recently learned building the Luggable Frame #1, a sharp internal corner laser cut into acrylic concentrates stress from surrounding components and is liable to start cracking from the point of the corner. Each of these tongues introduced two new stress points in each of the two sheets.

Since the only real upside here is making construction easier, I’ve decided this is not the way to build with acrylic. I should keep the edges for corners joints smooth and clear, free of these tongues, and figure out other ways to keep the pieces aligned during construction.

I’ll spend some time and effort to improve my acrylic joints before proceeding to build FreeNAS box prototype #2.

With the concept designed, it’s time to head over to Tux-Lab to build it!

To be honest, it was not fully designed for use as a computer case. Since this was my first effort designing for acrylic construction I expected to run into some amateur mistakes very quickly. As a result I had left some known design issues open to be resolved in future prototypes. One example: I had not designed any kind of door or hinge. The prototype panels are mostly glued together, except for the front panel which is held in place by tape.

Aesthetically, I am pleased with how the clear acrylic looked though I am not pleased at how much of a rat’s nest the power supply cables became. Taming wires is a perpetual challenge. I now understand why Apple enclosed all the ugly guts of the G4 cube in shiny aluminum shell inside the clear acrylic shell.

Other than the messy computer wires, the clear acrylic does hint at the illusion of a computer floating in mid air. I’m pretty happy with that, but it’s not enough to offset the tangle of wires. Next prototype will either have good cable management (takes effort) or have some dark colored acrylic to hide the interior (much easier.)

The cooling functionality worked as designed: the intake air is drawn from the bottom, past the two hard drives keeping them cool, and out the top.

Similarly, the designed goals of tilted-PSU (power supply unit) space optimization was successful, as did the gentler turn demanded of the wires. However, there was an unforeseen deal-breaker of an issue.

On the back side of the tilted-PSU, we see that the tilt has pressed the bottom of the PSU up against the wire bundle at the top of the motherboard. The tight quarters mean individual wires of the bundle tried to relieve the crowding by moving into the space for the PSU fan preventing it from turning. Since the PSU fan is the primary air-mover for this enclosure, a stopped fan is obviously not acceptable.

Space utilization efficiency has room for improvement. Some of this was caused by the desire to emulate the Apple G4 cube and have a square footprint. (20 cm squared!) The squareness was completely unnecessary and future iteration will likely have a rectangular footprint for space efficiency.

There was uncertainty about how well 3mm acrylic can hold the weight of the power supply unit. It proved to be surprisingly capable once the two top sheets reinforced each other at right angle.

Amateur Hour: A laser cutter only cuts vertically. There was no way to cut a 30 or 60 degree edge for the tilted PSU section! For this learning exercise, the cornered edges are simply left open and unattached.

The angled PSU was a novel idea to solve specific problems, but it caused new ones and also unsuitable for laser cut acrylic construction. That was a fun experiment, but we’ll have to leave the angled PSU concept behind for the next prototype.

Once the components are gathered, we start thinking about designing an enclosure for them. The tool of choice is the Tux-Lab laser cutter. The material of choice is acrylic sheet. The objective of the exercise is to learn how to build with acrylic and ideally create something novel and unique.

Since my mind is already on acrylic, it was a short jump to think about the Apple Power Mac G4 Cube. A landmark of industrial design. Obviously what I make won’t be as pretty, but it’ll be my homage to the cube. Here are the two main design considerations in my FreeNAS experiment #1.

Since the goal is for low power, low noise, and small size, I didn’t want to add any fans. The small fan on the processor and the large fan in the power supply will take care of their respective components. That leaves the two hard drives without their own cooling, so the enclosure will have to utilize airflow created by the power supply fan.

We desire the maximum cooling surface area that presents the fewest obstructions to the air stream. And we want to work with (instead of against) natural convection forces. Evaluating the possibilities, the best choice is to align cross-wise airflow to be vertical by sitting the hard drives on their long sides.

Following the lead of the G4 Cube, air intake will be on the bottom and the power supply (with its fan) will sit at the top to work alongside natural convection and exhaust hot air. 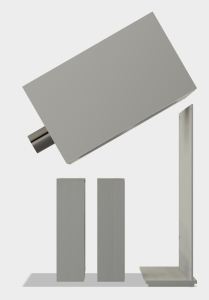 With the power supply sitting at the top, and the hard drives sitting on their sides against the bottom, that leaves a fairly large piece of unused space. The wires protruding from the power supply is also a concern. We either have to force those wires to make sharp downward turns to reach the system components, or we have to increase the depth of the enclosure to give the wires room.

Our experiment #1 tilts the power supply downward 30 degrees to utilize the available space to relieve the wire spacing issue.

Will these ideas work? Let’s build it and find out…

I wanted to play with FreeNAS without spending a lot of money to build the computer to run it. In fact, I would prefer not spending any money at all. This is a lot like how the Luggable PC project started: figuring out the most interesting thing I can do with computer parts I already had on hand. 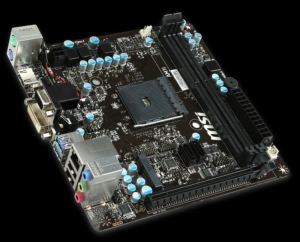 The brains of the system will be a Mini-ITX board, the MSI AM1I. I got this board a few years ago, along with its AMD Athlon 5350 processor while they were on sale at Fry’s Electronics together as a bundle. This pair has participated in many experiments and projects since. It was visible in some early Luggable PC project pictures, mostly of the January 2016 “Easel Frame” phase. And now, it will play host to the FreeNAS project.

The storage will be provided by two Seagate 2TB hard drives. These drives were part of my Windows Home Server and had been gathering dust ever since the server was decommissioned. They will now re-enlist to serve as storage for the home network.

The power will be provided by an ATX power supply that I’ve relegated to standby/ backup status. In its old age it has started to develop some coil whine. While it has not yet become a functional issue, the noise is unpleasant coming from a computer on my desk. Which makes it the ideal candidate for powering a NAS box stored someplace out of the way, probably out of sight, and best of all, out of hearing range.

I could throw all these pieces into a commercially available case, and call the physical setup done and turning this FreeNAS project into a strictly software learning exercise. But where’s the fun in that?

When I said I wanted to build a FreeNAS box I meant that literally: I want to build the physical box to enclose the above components.

Recently I lost access to my Amazon Drive for approximately 72 hours. There was no data loss, merely interrupted access, but it highlighted the fact that cloud-based storage can disappear on me just like any other kind of storage. This experience moved a back-burner project up to the front burner: adding NAS (Network Attached Storage) to my home network to supplement the (relatively) small SSDs in my computers.

I used to have a Windows Home Server on my home network, which presented network storage as part of its feature set. Sadly for me Microsoft had abandoned that product line, so I decommissioned my machine with no network-based replacement. I moved back to straightforward USB hard drives at home to supplement my cloud-based storage.

Since I’m not entirely sure a 24×7 network-accessible storage would be useful enough for me to justify the electric bill, I didn’t want to go out and spend several hundreds of dollars on a Drobo or similar commercially-available NAS. I also wanted to learn more about this part of the computing world. Drobo (& friends) are designed to be super easy to use, set-and-forget computing appliances. I wanted to see a little bit more under the hood and get a better feel of the nuts-and-bolts.

A desire for lower up-front cost and an interest in seeing the guts… sounds like time for an open source software solution! And like most open source solutions, there are several different projects, some with multiple forks, all proclaiming to be the best solution to the problem.

I decided to try FreeNAS as a starting point. The code base has been around a while (though supposedly extensively rewritten recently) and it is currently funded by iXsystems who makes money by selling storage solution for businesses. (Basically hardware specifically built to run FreeNAS.) So the product has some history, and has a funding source to help make sure it has a future. Both are good things.