Today was SevenStock 20 and I attended with my RX-8 in her BB-8 Halloween costume. Last year I attended SevenStock with the costume only partially completed. This year it is complete but a little faded from running around over the past year under SoCal sunshine. It was still plenty distinctive in the row of RX-8 lined up in the show & display area. Many people took pictures, some even took me up on my hint and posted on Instagram tagged with #rxbb8.

Out of all the cars on display, the one that stood out to me was ironically not a rotary-powered vehicle at all. It was a Mazda R360, Mazda’s first car built in 1960. By modern standards an adorable tiny little thing. It was on display at the Mazda corporate area along with other Mazda vehicle currently on the market. Which meant the little 1960 Mazda was utterly dwarfed by the modern Mazda SUVs on display. 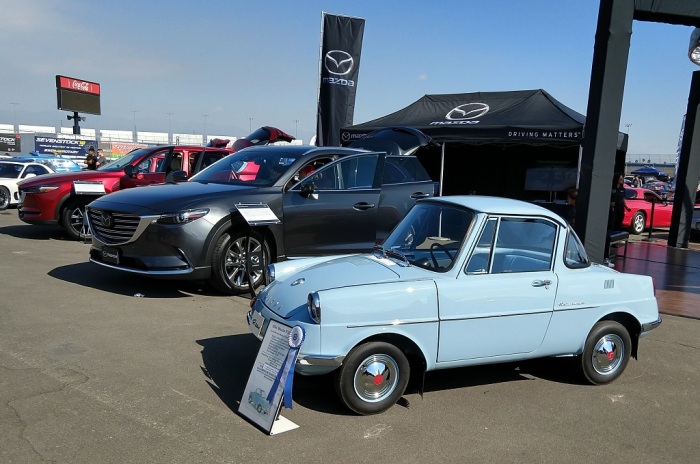 There were many powerful speed machines on display, but I kept coming back to admire the little R360 that can barely reach highway speed. There are four seats in the car but I don’t see how four adults can fit in this little box. It looked closer in size to a kid’s Power Wheels car!

SevenStock takes place on the infield of the Auto Club Speedway and the track itself was open during the event for people who paid a fee and can pass safety inspection. There was a sizable contingent who love the idea of driving out on the oval but for one reason or another passed on the high-speed track time.

This year the organizers tried an experiment: a “parade lap” to get a taste of driving on a banked oval via a bit of token track time. The thundering herd was led by the trio of historical rotary-power race cars brought by Mazda, and we stopped a few times on track for the scattered pack to organize. Here’s a picture taken during one of the on-track stops. 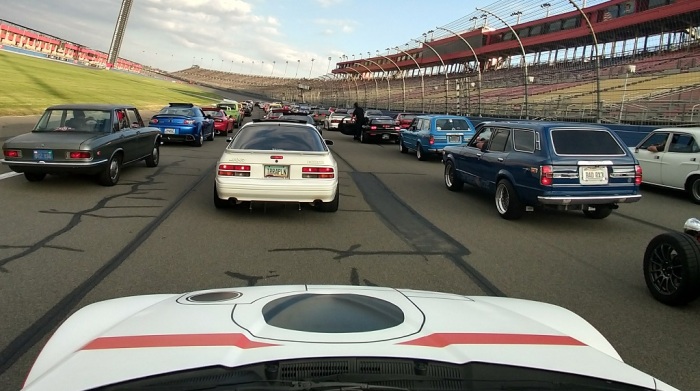 The price of admission for the “parade lap” was $15, and I thought it was well worth it for the novelty value of taking my car on a real high-speed track. Even if we were only going at city-street speeds.