I have arrived at SparkleCon! I had thought this event was just at the hackerspace 23b Shop, but it is actually spread across several venues in the same business park. The original plan also included activity in the parking lot between these venues, but a powerful storm ruined those plans. Given this was in Southern California the locals are not very well equipped to handle any amount rain, never mind the amount that came pouring from the sky today. So people packed into the indoor venues where it was warm and dry. STAGESTheatre is where some talks were held, like Helen Leigh‘s talk From Music Tech Make to Manufacture demonstrating her Mini Mu. 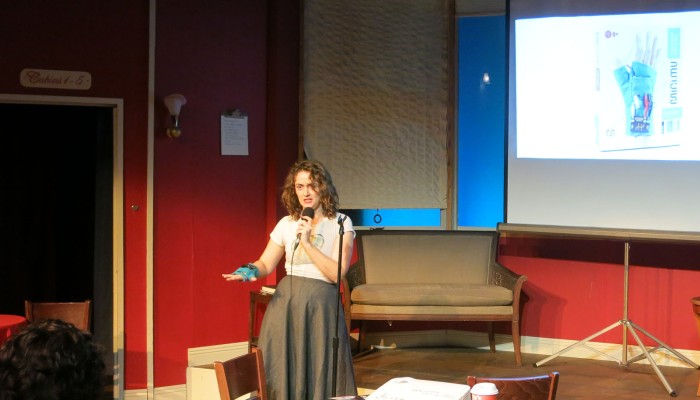 The doors of Plasmatorium was also open and primary source of music. And finally the National Upcycling Computer Collective which had this festive sign displayed.

One corner of NUCC was set up with a pair of couches and a table, which grew into KISS Tindie headquarters. The original plan was to set up an inflatable couch and table someplace in the outdoor region, but the rain cancelled those plans and we took over this space instead.

The table started the day empty, and there was a time when it was populated by scattered stickers, but towards the evening it became an electronics workshop. Here we can see multiple simultaneous projects underway.

I had a few taco, fries, and octopus kits to give out. While talking about tacos and KISS Tindie sculptures, it was suggested that I use my newfound circuit sculpture skills to build a taco truck. So I did! 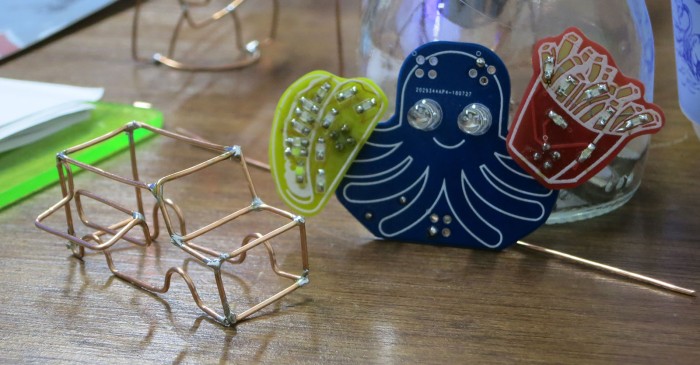