Sawppy’s publicity appearance today was at Brawerman East STEAM Makers Fair, a supercharged science fair at a private elementary school. Sawppy earned this invitation by the way of January presentation at Robotics Society of Southern California. The intent is to show students that building things is more than their assignments at their on campus Innovation Lab, there are bigger projects they can strive for beyond the classroom. But the format is, indeed, just like a school science fair, where Sawppy got a display table and a poster board.

But Sawppy is not very interesting sitting on a table, it didn’t take long before the rover started roving amongst other exhibits. The school’s 3D printer is visible on the left – a Zortrax M200. 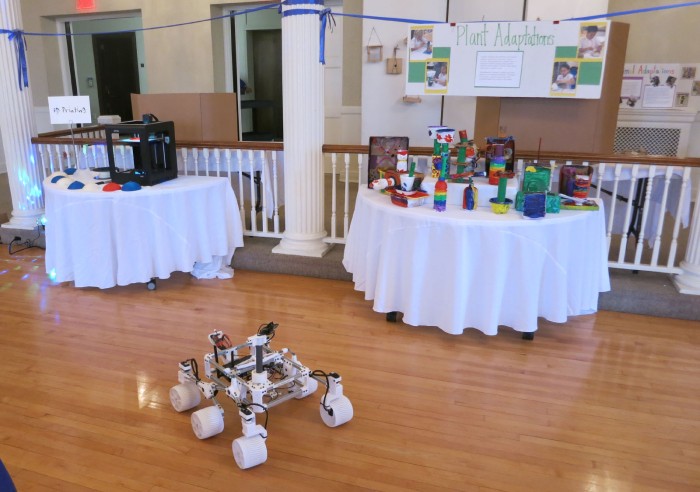 Sawppy was not the only project from grown-ups present. I admire the ambition of this laser cutter project undertaken by one of the parents. Look at the size of that thing. It is currently a work in progress, and its incomplete wiring were completely removed for this event so little fingers are not tempted to unplug things and possibly plugging them in a wrong place.

The center of this tables had some old retired electronics equipment that kids will be able to take apart. This was a huge hit at the event, but by the end of the night this side of the room was a huge mess of tiny plastic pieces scattered all over.

I brought my iPad with the idea I could have Sawppy’s Onshape CAD data visible for browsing, but it turned out the iOS Onshape app required a live internet connection and refused to work from cache. As an alternate activity, I rigged it up to show live video footage from Sawppy’s onboard camera. This was surprisingly popular with the elementary school age crowd, who got a kick out of making faces at the camera and seeing their faces on the iPad. I need to remember to do this for future Sawppy outings.

After Sawppy was already committed to the event, I learned that a Star Wars themed art car was also going to be present. So I mentioned my #rxbb8 project which earned me a prime parking spot on the first floor next to the far more extensively modified “Z-Wing.” Prepare to jump to hyperspace!