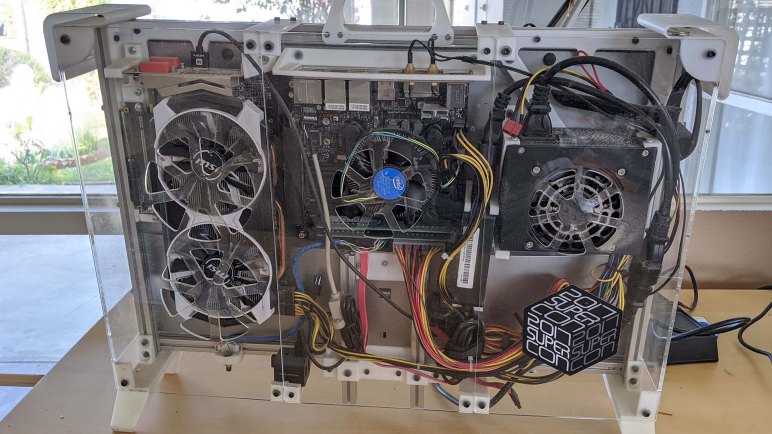 The era of Luggable PC Mark II has come to an end. It has served me well for over two years, during its service collecting a generous coating of dust clearly visible through the clear acrylic panels. (In hindsight, not the best of ideas.) It has also collected an event souvenir in the form of the Hackaday Superconference 2017 sticker, where I had set it on the badge hacking workbench to create my time-lapse video project.

The point of failure is the video card subsystem, which is the primary purpose of the Luggable PC line of projects. Here’s the output when everything is healthy: the command lspci would include a line for VGA compatible controller: Advanced Micro Devices, Inc. [AMD/ATI]. But sometimes, the video card does not answer to roll call and that line is absent. When this occurs, the system falls back to Intel integrated graphics.

It’s not clear if the failure originated in the video card, or in the flexible PCI extension ribbon cable that has caused problems in the past. I am tempted to replace the video card now that the cryptocurrency fad has calmed somewhat. High performance video cards are still rather expensive, but at least they are available for purchase! I had always intended to replace the video card in Mark II but the cryptocurrency craze distorted the market so much I ended up buying a laptop for my mobile computing needs. Once I had the laptop, the portability of Mark II was no longer as important.

Another development in hardware are the falling prices of UHD (or 4K) computer monitors, motivating me to move beyond the Lenovo QHD monitor at the heart of Mark II. A new video card and a new monitor working together to deliver UHD resolution at 60Hz was tempting enough. I will be removing the core of the machine (Mini-ITX motherboard, CPU, RAM, and M.2 SSD) into a commodity enclosure instead of building my own, driving a new RTX 2070 video card and UHD monitor. This will serve as my desktop computer until I feel the need to build a Luggable PC Mark III.