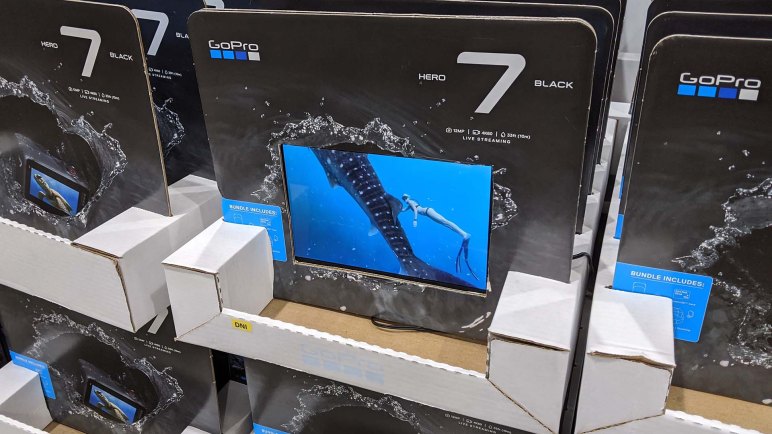 While I was at Costco for grocery shopping and checking out rechargeable batteries, I walked through the electronics section. For certain items, the actual merchandise is not available in the shopper-accessible warehouse. Instead the warehouse pallet hold sheets of cardboard that shoppers take to the cashier. Once paid, the receipt is shown to a secure caged area attendant who delivers the actual merchandise.

Familiar with this system, I was not surprised to see pallets stacked full of cardboard sheets in the camera section and didn’t think much of it until my peripheral vision reported unexpected motion. GoPro camera packaging always advertise with beautiful people having amazing adventures, but one of these was moving. Cardboard doesn’t do that. 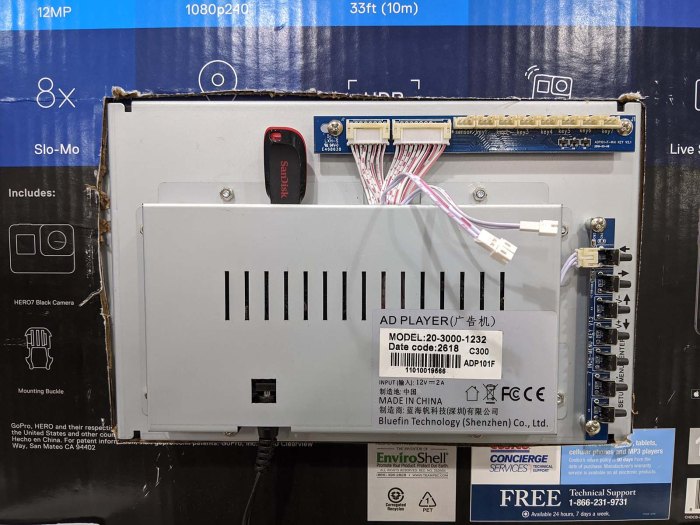 Stopping to investigate, I found one of the cardboard sheets has been modified. A rectangular hole was cut, and a video-playing LCD screen complete with associated electronics was inserted. A USB flash drive presumably held the GoPro promotional video, and that was the extent of the modification. There was no rear enclosure so it was easy for me to take a picture for further research once I returned home.

Given the information visible, I searched for Bluefin Technology “Ad Player” Model 20-3000-1232. This led to the manufacturer’s website and some minimal specifications. While the product label clearly labeled the device as made in China, the web site lists an office in Georgia that I presume was their USA distributor. So I was surprised that I couldn’t seem to find this module for purchase online, the only units I found for sale were secondhand on eBay. Most surprisingly, typing the model number into Alibaba and AliExpress also came up empty! I infer this to mean the company only sells to other businesses and there’s no retail sales channel.

I had thought this device would make a promising platform for hacks depending on price. Second hand eBay Buy-It-Now price of $70 is not terribly promising, I had been hoping for something closer to $30. But until I find a retail source or decide to buy in bulk directly from the manufacturer, none of that matters.

Posted in Electronic Components, TIL2 Comments