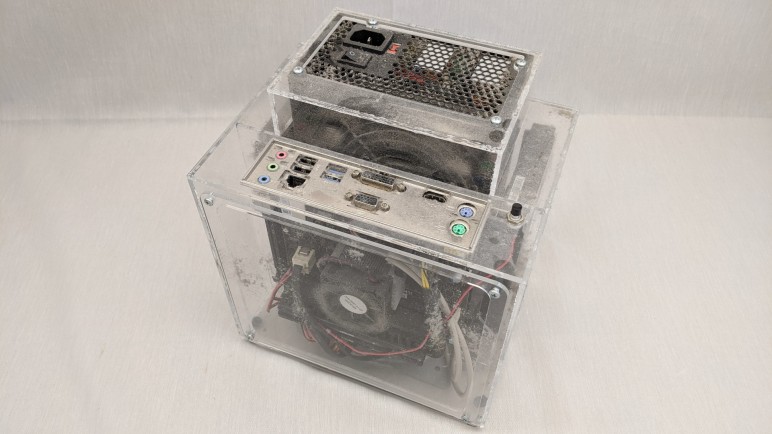 Three years ago I started this custom computer case project to build something tailored to run FreeNAS. The primary purpose was to get some hands-on time working with laser-cut acrylic, and I learned a lot building it. Now that I’ve decided to upgrade my home server to a different configuration, there will be too much hardware to fit in this box. I’ll start with a commodity PC tower case but I might build another custom case later. Either way, this little acrylic box will be retired.

Since the computer has been sitting in a corner unobtrusively serving up files for my home network, it has also collected three years of dust. The top layer is not particularly interesting, as they were deposited by gravity. The remainder, though, serve as indicator for airflow through the system and serves as a record of comparison against my intended airflow design for the box.

The biggest lesson for me was that convection played a much smaller role than I had expected. Most of the dust indicating flow was proportional to the size of their air channels, there’s no visible sign of convection altering the flow. The most visible example is the ring of dust near the CPU fan on my front panel. I had expected it to be slightly teardrop-shaped to reflect heat rising, but it is almost a perfect circle.

The most unexpected cluster of dust is on the auxiliary CPU power cable, running to the right side of the CPU fan alongside the USB wires. It appears most of the dust there were carried by air drawn in through the front panel gap. I hypothesize that, since it is a very narrow gap, airflow through that route is slowed and thus more likely to deposit dust on that cable bundle.

There were a few minor smudgest of dust whose origins are a mystery. Two up top near the PSU fan, and one on the bottom at the rear end of the PSU. I’m curious what they were, but their fine dust particle size implies they were not a significant factor, so I’m content to leave them as mysteries for now. Maybe they’ll make sense for me in the future once I learn more about designing for airflow. In order to preserve this information (all this dust will be disturbed and cleaned up when I disassemble this box) I shot a video for future reference: