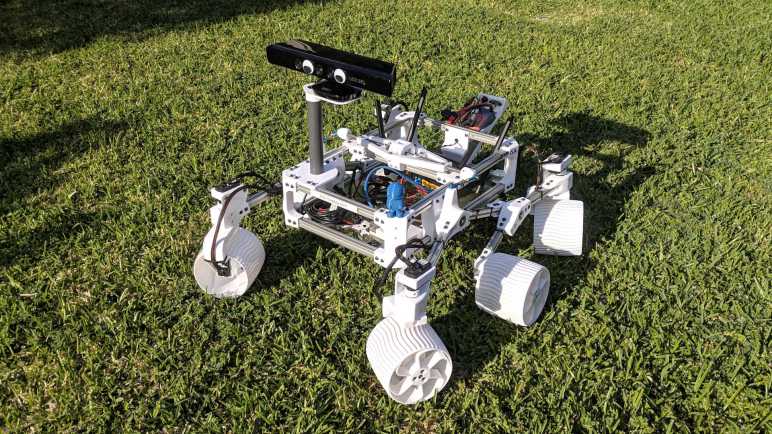 One of the reasons I became interested in AS7341 multi-spectral sensor was the fact it was an affordable and nondestructive instrument with an approximate analogue on real Mars rovers. I have been keeping a watch for interesting instruments that I might install on board Sawppy to emulate the rolling science laboratory nature of its Martian inspirations. During a visit to DTLA Maker Faire 2019, Sawppy had the opportunity to ferry around an air quality sensor courtesy of people from the South Coast Air Quality Management District. That was interesting but not representative of real Mars rovers as Mars did not having much of air to monitor quality of.

The most interesting and fatally flawed idea was to give Sawppy a variation of Curiosity’s ChemCam or the Perserverance SuperCam successor. As cool as rover space lasers might be, a rock-vaporizing laser on a rover that drives near human children seems like an extremely bad idea.

A similar idea was to mount a small Dremel tool on board Sawppy’s yet-to-be-built robot arm. This is a Mars rover tradition started by the MER (Mars Exploration Rover) twins Spirit and Opportunity. Whose robot arms held a Rock Abrasion Tool (RAT) to cut through rock surfaces in order to evaluate rock composition within. Curiosity rover has a drill, and Perseverance rover expands on that for rock core sampling. A motorized cutting bit is somewhat less dangerous than a vaporization laser, but still seemed like a bad idea.

There are several spectrometers aboard each of the rovers designed to look for different things. This spectrometer onboard Curiosity rover analyzed atmospheric composition. This one lives at the end of Perseverance rover robot arm. Maybe an AS7341 can act as a simplified stand-in for certain Mars rover spectrometers?