After some time using the assembled Luggable PC prototype, I wanted to adjust the screen ergonomics. While the screen has been raised to a height much more comfortable compared to a laptop, after a few hours of use I wished I could tilt the screen upwards a few degrees.

At first glance this would have been impractical – the screen hinge design is already complicated and adding a tilt adjustment mechanism would only make it more so. So instead of tilting the screen, let’s achieve the goal by tilting the entire Luggable PC by adding 3D printed feet that can be bolted to the bottom of the machine.

The easiest approach would have been to print a simple solid wedge with the desired angle, but I decided to be a little more experimental. I played with Fusion 360’s spline tool to sketch out feet that are designed to move and flex a tiny bit. The flexibility adds two features:

Here is the first iteration, which accomplishes the desired goals:

Unfortunately it also has a problem: by moving the contact points inward, the front feet are now uncomfortably close to the center of gravity. A slight push from the rear will send the whole thing toppling forward. The design needs to be adjusted to have a wider stance… but we are constrained by the fact the fastening nuts still need to be accessible.

In this case, the short-term fix is to move the feet as far front as possible while still allowing wrench access to fasteners.

The real solution is to redesign the bottom of the case to accommodate the feet while maintaining a sufficiently wide stance. This idea was incorporated into the following iteration of the Luggable PC. As it used aluminum extrusions for backbone instead of threaded rods, the new wider feet were installed on the bottom extrusion. 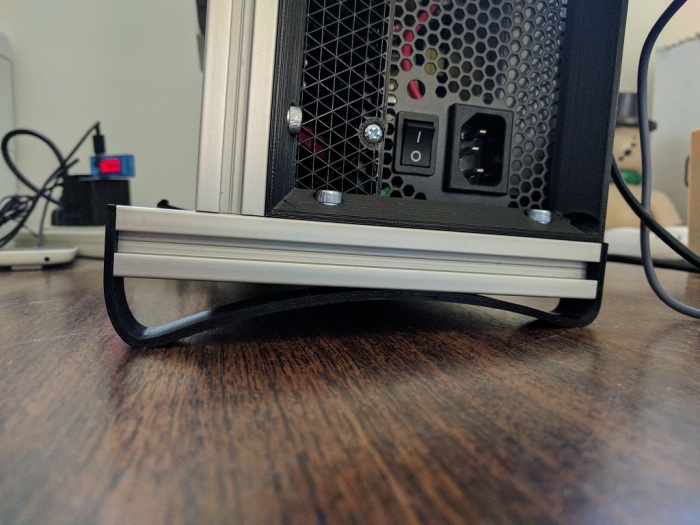