For the portable external monitor project, version 3 (PEMv3) , we want to pack our components more tightly together to create a compact package. The most inconvenient barrier to the goal is the old back light driver board mounting bracket. While the circuit board itself was already dead when I got the laptop and promptly removed, the bracket for the driver board was still present during PEMv1 and PEMv2. The aftermarket back light driver board is significantly larger than the original Dell part and would not fit in the bracket. I had originally hoped the bracket can be recruited into a new role but none had ever come up.

So now it is time to trim off the bracket.

The front part of the bracket is riveted to the thin metal bezel of the LCD panel. The rivet makes it easy to remove with a Dremel grinding tool, but I was concerned about the potential for metal particles to damage the panel. I spent more time covering and wrapping the rest of the panel than I did removing the rivets. 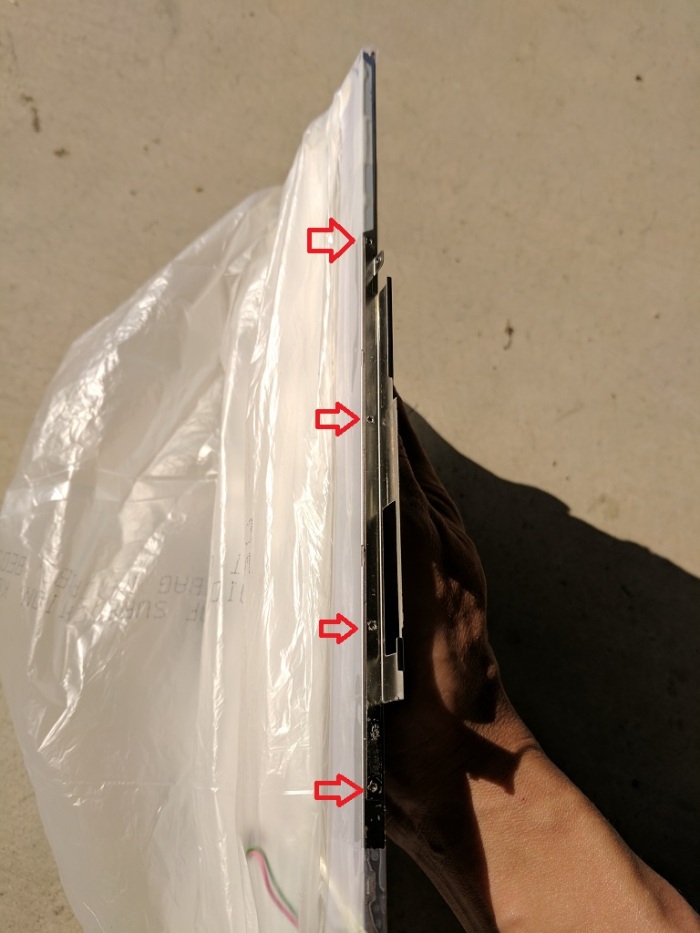 The rear part of the bracket is part of the panel mounting frame. Since there were no electronics here, I didn’t have to worry as much about damage. I will need to thoroughly clean up the work piece afterwards to minimize the number of particles that are still sticking, but I didn’t have as much risk while doing the actual cutting.

I chose to minimize the cut length which removed more metal than necessary because the shortest cut connected the two large bottom holes. We should still have enough structural strength and mounting holes for the frame to be useful.

With the old bracket out of the way, it’s time to pack our components into the space previously occupied by the bracket.