Two years ago I said goodbye to AT&T internet (formerly branded U-Verse) because it was slower yet cost more than the faster Charter Spectrum cable internet‘s introductory rate. As a longtime customer of Comcast Xfinity in the Pacific Northwest, I knew the game of calling in every year to renew that “introductory” rate. So after my first year with Charter, I called and got on a different promotional rate that was a little higher but still enough of a discount from the full rate to make me stay.

Since then, Charter has completed its acquisition of Time Warner and stories started surfacing about how they are aggressively raising their average revenue per customer. The prices went up and promotional discounts disappeared. This month I found out for myself. My promotional rate was expiring and the base cost is going up. I called in and talked to the normal customer service representative as well as the customer retention department. I was disappointed that no price discount was available even when I said I wanted to stop service. Well, they are indeed serious, and because I live in an area with some competition, I was not bluffing about leaving. So long, Charter!

Since I’ve been away from AT&T for two years, the fine print implied I should qualify for their introductory rate again. But before I move from one mega-corporation to another, I had another option: Giggle Fiber. The name is silly and it was easy to wonder whether they might be trying to riff off press on Google Fiber.  But as far as I can tell they are a legitimate internet service provider with a small local service area. Unlike most high-speed service providers, they don’t even have their own Wikipedia page. They were only mentioned in passing as an entity that acquired the internet service assets of a different company. Their business model seems to be fairly straightforward: to compete with the big guys, offer more speed for less money.

My home straddles a city line so I’m at the edge of their service area and it took some asking around to determine I was indeed eligible. Most of my research only found fluffy marketing pieces in local newspapers, which made me pause, but eventually I decided to support the small local business. The installation ran into a few issues and took longer than the scheduled time slot, but the installation staff were friendly and courteous and got their infrastructure problems resolved.

At the end of the day, the numbers don’t lie. Giggle Fiber is fast. Now I just have to see if the service is reliable as well. 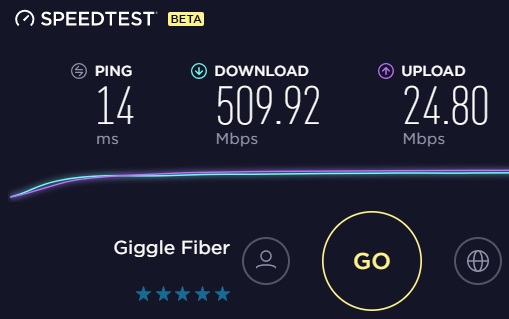