An old Black & Decker BHD9600CHV Dustbuster has been crippled by its degraded battery. The prime suspect for the degradation is the simple charger unaware it was overcharging the battery pack. We’ve decided to leave behind both the degraded Ni-Cad battery and suspect simple charger. We will replace them with rechargeable lithium-ion batteries.

We have many lithium-ion battery designs to choose from. The different physical form factors are visually obvious, but there are also less visible internal differences. The motivation for these internal differences come from optimization for different usage scenarios. A battery with the wrong usage pattern could result in poor performance, poor battery life, or maybe even fire.

The first candidates are the battery cells extracted from dead laptop battery packs and occasionally used for small electronics projects. These cells were designed to hold a lot of charge then dispense power slowly and evenly over several hours of a laptop’s battery run time. A Dustbuster has a different discharge profile, pulling a lot of power in short bursts. They might not be happy together.

The next candidates are the batteries for remote-control hobbies. RC aircraft and cars are very hard on their battery packs, drawing high amount of power almost constantly over a period of time usually measured in minutes. There were some batteries on hand for small remote-control aircraft, but they could not sustain the amperage draw of the Dustbuster motor. While it is an option to buy some higher-amperage rated battery packs, and they would happily power a Dustbuster, but they are an expensive overkill.

We would prefer something between the above two extremes of the spectrum. Looking around at other lithium battery packs already available, attention settled on a set of cordless power tools powered by 12V lithium battery packs. (Sears Craftsman NEXTEC series.) A handheld vacuum has a power profile very similar to most power tools: short bursts of high power draw. The 12V nominal voltage is higher than the 9.6V of the old battery pack but close enough the motor should be OK as long as used in short bursts. And hopefully the higher voltage gives the vacuum a boost making it even more capable than new.

These cordless tools were purchased in a combination pack, all using the same NEXTEC battery. The LED work light is the least useful member of the pack in this household already full of LEDs. Let’s take it apart and see how we can use it to adapt a Dustbuster to run on the NEXTEC lithium-ion rechargeable battery pack. 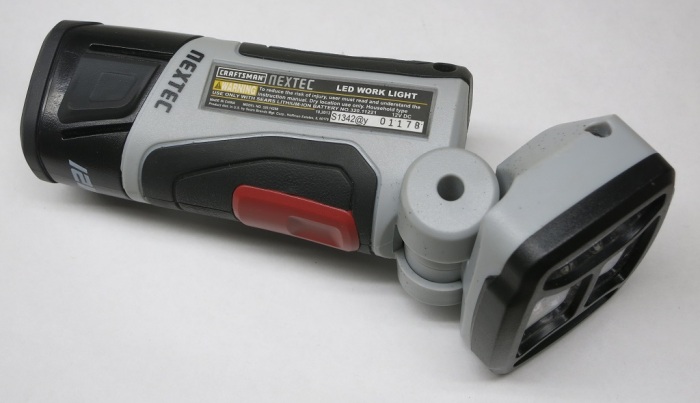