The product description page for Monoprice PowerCache 220 (Item #15278) had pictures showing its solar charging input as two round ports, but there were no connector specifications. Since it was advertised as a solar power cache, it would make sense for them to be MC4 connectors. This turned out not to be the case – they were actually two identical sockets that are electrically wired in parallel.

The device comes with an AC adapter for the charging port, but using household power would miss the point of the exercise. Neither do we want to lose the option to charge from grid power, so we don’t want to just cut off the charging plug. We should find an identical plug for solar charging.

The calipers indicate this connector has an outside diameter of 7.9mm and an inside diameter of 5.5mm. There is a small pin in the center roughly 0.5 mm in diameter. Putting those dimensions into search returned a few candidates and a large number of Lenovo laptop power adapters. A fortunate association, as there is a Kensington “Universal Laptop Power Supply” already on hand. It came with a set of interchangeable plugs to fit different laptop brands. This one was purchased to power a Dell, so the Lenovo plug has sat unused. But not for long! 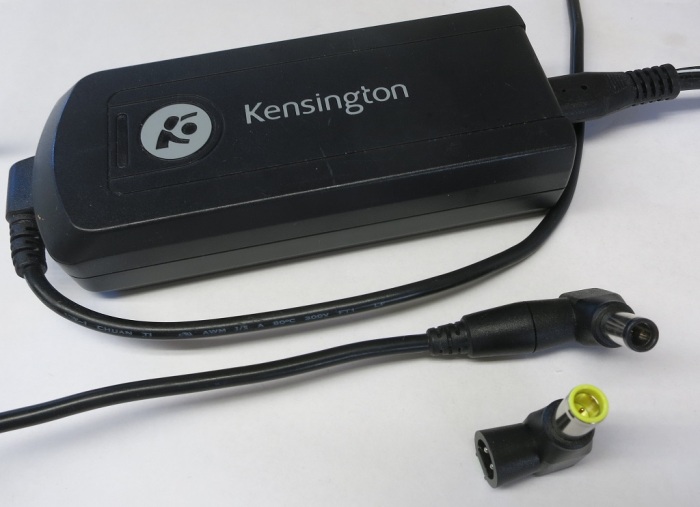 The Lenovo laptop plug matches all the diameters, and is slightly longer. It appeared to fit in the socket nicely. Since the two charging ports are electrically parallel, we could plug the AC adapter into the other charging port. This allowed us to read the voltage on the pins of the Lenovo plug so we know where to solder the positive and negative wire.

The plastic housing of the Lenovo plug was damaged in the soldering process so this plug will probably never fit on the Kensington laptop adapter again, but that’s fine. It now has a new purpose as solar charging plug for Monoprice PowerCache 220.