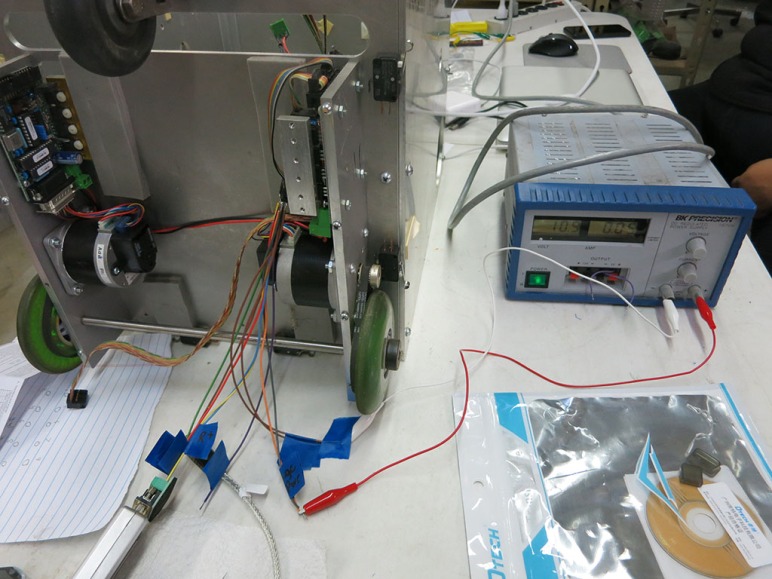 The motivation to learn about stepper motors came from Bart the robot. The previous owners had pretty much cleaned out Bart components, but the locomotion subsystem is mostly intact. This consists of two wheel assemblies, each of which is driven by a beefy-looking stepper motor with a quadrature encoder attached to the other end of the shaft. This assembly is attached to a control board of some sort, implying closed-loop control. The board looks superficially intact so the obvious first step is to see if we can make them run.

The control board is made by J.R.Kerr LLC, a company that has since been acquired, but apparently there’s some sort of tech support obligation still in effect. Contacting the new owners confirmed the product is long out of production and no longer on the actively supported product list, but they suggested we look at documentation one of its still-supported relatives “PIC-SERVO 3PH” to get a rough idea. From such documentation we learned the product line communicate to each other via a protocol called “NMC” over RS-485 hardware. The official adapter “SSA-485” costs more than what we’d want to spend just for exploration, but there are vendors on Amazon selling RS-485 adapter (*) for impulse-buy money.

The adapter takes care of the hardware. For the software, a NMC Test Utility was available from the software downloads page. As the only person with a Windows machine, my laptop was roped into test duty.

The first exploration session was a failure – there was no response from the control boards at all. But there were no smoke and no fire, which is good. Probing the board confirmed components were receiving power, but there was no communication and certainly no motor motion. Thankfully, the second session was more successful.

tried talking to Bart the Robot at the maker group tonight. Sadly, Bart did not return the gesture