When shopping for the Dell Inspiron 15 7000 (7577) I browsed the various configurations available. It was clear the chassis has provision for two storage devices: One M.2 slot (with NVMe support) that is home to a SSD, plus one 2.5″ drive bay that is sometimes populated by a spinning platter hard drive.

This was an attractive feature of the chassis. Having two drives would allow dual-boot  between Windows and Linux while keeping each operating system completely independent. This is how I typically set up my desktop (and luggable) computers, but historically laptops only had one drive bay so this is a new luxury.

Since I don’t intend to use a spinning platter drive, I ordered the configuration with only a M.2 SSD. And while the chassis has provision for a 2.5″ drive, buying with only a M.2 means I’m not guarantee to receive all the support hardware necessary to use that 2.5″ bay. I held my breath when I first opened up the computer and exhaled a sigh of relief when I saw that all the hardware was present.

Here are the 2.5″ bay hardware that Dell shipped in this chassis:

All of these parts are highly specific to this chassis and would have been a real pain to procure separately. I might have been able to fabricate a drive bracket, and maybe find some screws that worked to hold it to the chassis. But the SATA adapter is well beyond my skills to build my own. 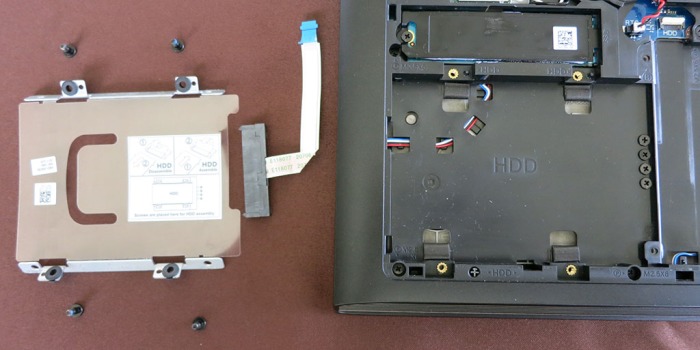 A special happy surprise were these four hard drive mounting screws. They are  standard M3 fasteners and easy to procure separately. (Some 2.5″ drives even come with a set in their package.) But Dell decided it made sense to keep a set on hand inside the computer ready to go. Sitting in a row here, they serve no structural purpose. They’re just waiting for a 2.5″ drive.

The 2.5″ bay accepts only slim 7mm drives, so full size 9mm drives would not fit. I installed an Intel 530 series SSD as it was the most convenient 7mm drive already available on hand.

Unfortunately this drive did not play well with the laptop. 530 Series were known to be finicky and has caused problems in a few of my other computer projects. (Which is partially why it’s sitting around gathering dust…) And the problems continued inside this Dell. It was so unhappy, in fact, that not only would it stop responding to the computer, it would also occasionally knock the M.2 drive offline. Whatever it was doing, it wasn’t good.

I had an Intel 320 series SSD also sitting around, whose metal case would also work in a 7mm bay but it had the plastic spacer to make it fit snugly in a 9mm bay. Removing the plastic spacer was as simple as removing four screws (though it would have voided the warranty if it hadn’t already expired) but it also meant the drive fell apart. I ended up pulling two screws out of the 350 Series drive. That was good enough to hold the drive together in the laptop’s 7mm bay.

The 320 series was much happier working inside the Dell laptop, so now I could proceed to install the latest Ubuntu LTS (18.04) on that drive. Though I ended up having to erase 18.04 and go back to the much older 16.04.4, that story is coming up next.