Yesterday Sawppy went on an adventure to the downtown Los Angeles Mini Maker Faire. There Sawppy found a receptive and appreciative audience. There were a lot of enchanted kids, interested parents, and other makers who might be building their own Sawppy rovers.

The morning started out with Sawppy sitting on a table alongside a few different builds of JPL open source rover. Eric’s build is on the left in black and white, Santa Susana High School build is on the right with purple printed parts.

My rover #sawppy is ready to meet new people and make new friends at #dtlamakerfaire! pic.twitter.com/nN0W8xGiUV

Taking Sawppy around and talking to individuals about Sawppy was a lot of fun and something I’ve done in other contexts before. I have hopes for a few of the contacts to develop into something cool for Sawppy’s future. What’s new this time was that I also signed up to give a short 15-minute presentation about Sawppy and that took more work and preparation. Thanks to the 2-minute “lightning talk” opportunities at Hackaday LA the past few months I’m less nervous about public speaking than I used to be, but I still got pretty stressed about it. I’m sure it’s a matter of practice and the more I can take advantage of such opportunities the better I’ll get.

Outside of the presentation, Sawppy and I spent most of our time on the astroturf across the walkway from the officially assigned display area. It was a hilly part of the park which meant there were no tables or booths set up there, and it was a good place to demonstrate rover suspension in action. I had a spare phone set up to be Sawppy control and handed the control to anyone who wanted to pilot Sawppy for a bit. 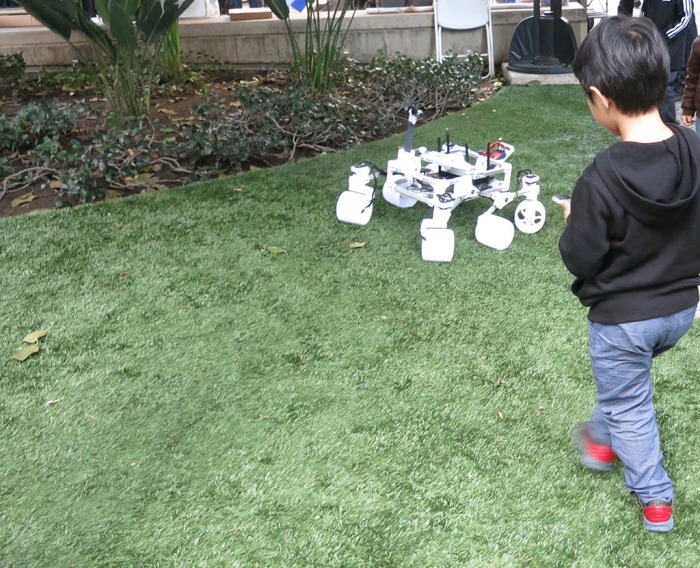 Most were content to run around the turf. Some of the little ones tried to run Sawppy into their siblings. A few ran into the bushes beyond the turf for a more rugged demonstration of Sawppy chassis. A perpetual favorite is to have Sawppy climb over shoes. 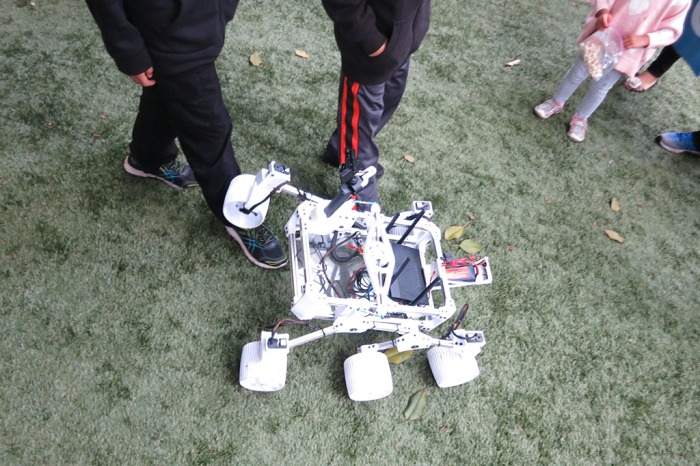 Thanks to refinements to improve robustness over the past few months, Sawppy came out of the experience with only a slightly wobbly left rear wheel that was easily repaired by tightening the set screw on the left rear steering servo coupler. A great improvement over earlier outings!