Now that we got a blurry dot on screen of picture tubes we removed from a Sony KP-53S35 rear projection television… it is encouraging for us to keep going and see how much further we can go. There are two main avenues of investigation: (1) How to make a better and tighter beam, and (2) how to control direction of that beam.

To help experiments on making a better and tighter beam, we’re going back to the harvested pile of parts. A control box with three knobs labeled “focus” seems promising. It also has three other knobs labeled “screen” whose purposes we’re not sure about. This box had been mounted with the knobs facing forward such that a technician can access these knobs while looking at the screen.

The back side of this box has a few wires. Most significantly, a pair of wires went to each of three picture tubes. In this picture, we still see the wire pairs for the green and blue tubes attached. The empty spots are for the red tube, removed before this picture was taken. The yellow, brown, and upper left corner black wire is unknown. The red wire in the lower left is connected to the high voltage transformer.

Pulling the camera back shows the system in a little more context. 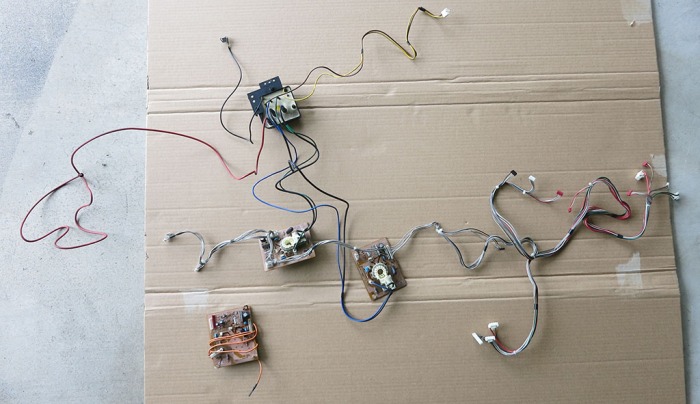 Close-up pictures were then taken for each of the three picture tube PCBs for future reference. 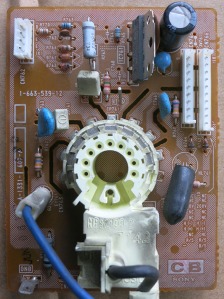 Our earlier experiment used a transformer purchased off Amazon intended for something else – we had hoped its voltage would be close enough, and it was. Now for the best beam we want to get the correct voltage by using the original transformer which generated the voltages for these tubes. It lives on one of the two main circuit boards that had lived at the bottom of the television. This board is where the power cord connected, so it has the power supply and everything relating to high voltage. The transform is still attached to an unit that distributes voltage to the three picture tubes.

The transformer isn’t expected to be terribly delicate, so the cheap hot air gun will be deployed. But before that, a picture of its PCB footprint was taken for possible future reference.