The main reason I wanted a less delicate and more portable form for my laser Lissajous project is that I wanted to bring it to show-and-tell at SGVTech meetup. I got it printed and assembled a half our before the meet. I verified it could make a basic Lissajous curve and then it was time to go.

It was an interesting piece of novelty for show-and-tell. The laser was difficult to see against the ceiling of the space, so I ended up tilting the contraption on its side so the laser is projected sideways onto a taped-up sheet of white paper serving as screen.

I started the night with sine waves that produced decent Lissajous curves. Then we started playing around. LRWave allowed us to feed different wave forms in – triangular, sawtooth, and square waves. Each produced their own wild patterns, but after a while we noticed some changes in the system. Reverting back to sine waves no longer reverted to soothing sounds and smooth curves. Looking over the apparatus, we found that a speaker has rattled itself loose. Tightening fasteners back down did get us some of the curvature back, but could not eliminate all the extraneous vibrations affecting the curve. Something else is degrading. Either the hot glue holding mirrors to the speaker, or the coil inside the speakers.

By the end of the night, between all the potential variables of speaker degradation, glue adhesion failure, mirror flex, and extraneous vibration in the system, the laser curves stopped being Lissajous curves and started becoming wild abstract modern art. It had come full circle: I started this with a 3D-printed stand that was a tribute to Frank Gehry. By the end of the night, the laser projection started resembling Frank Gehry sketches. 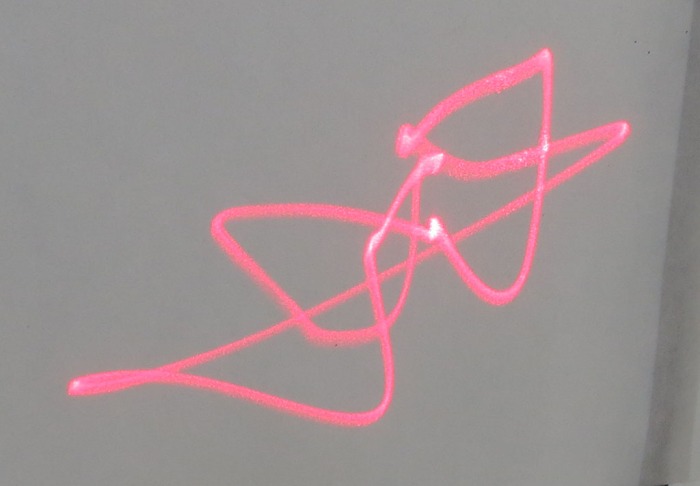