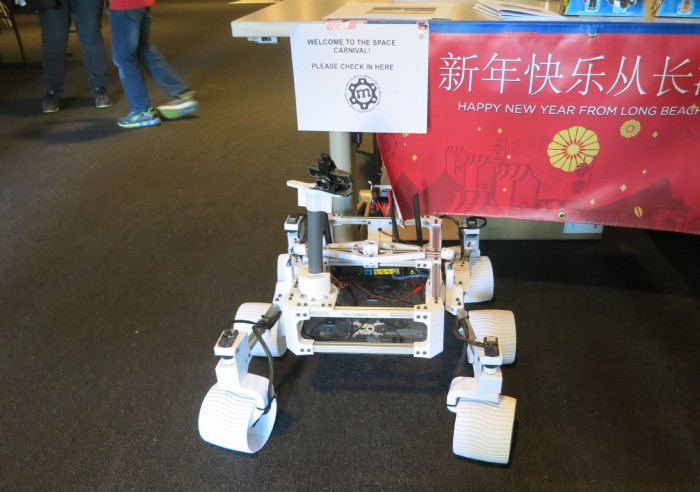 Space Carnival, held at the Expo Arts Center in Long Beach, California, welcomed Sawppy as one of several exhibits Monday afternoon. It turned out to be part of a week-long LEGO robotics camp for elementary school students. Most of the events are for campers, but the Monday evening Space Carnival was open to the public.

Since the focus is on LEGO, there were plenty of plastic bricks in attendance. The middle of the room had a big pile of bricks on a plastic tarp and kids were crawling all over the pile building their creations. Sawppy mostly spent time outside of the tarp, occasionally venturing on to some of the colorful game boards for LEGO robots to line-follow and other tasks.

As usual, I handed controls over for kids in attendance to play with. Running over feet is still more popular of an event than I can hope to understand but, if it makes them excited, so be it.

Sawppy was not the only non-LEGO robot in attendance, there were also a selection of Star Wars licensed merchandise including this R2D2. I forgot if this particular unit was made by Sphero or Hasbro.

This event was not the first time I crossed paths with Barnabas Robotics, but it was the first time I got to speak with them beyond the standard sales pitch type of discussions. Since their business is STEM education for students K-12, they have a good feel of what type of material is appropriate for various age groups. It’s possible Sawppy can find a role in high school curriculum.

At the end of the night, the LEGO tarp cleared out enough for me to drive Sawppy across the field. Unfortunately I saw Emily’s tweet too late to replicate the movie clip she had suggested. Maybe another day!

Sawppy running over legos like a Terminator Hunter Killer crushing so many human skullshttps://t.co/gMttFrC3jb