We’ve pulled the battery packs out of a Neato XV-21 found in a thrift shop. We’re pretty sure the red and black wires are battery positive and ground, but if so we expect to see a few volts across those wires. The fact we measured less than a volt indicates this battery is flat and may even be damaged. Well, at least this would be consistent with the fact it wouldn’t power on in the thrift shop.

Fortunately, rechargeable NiMH battery cells are hardier than lithium batteries and they might possibly revive with a charge. And even if they were permanently damaged, they are less likely to turn themselves into fireworks as damaged lithium batteries sometimes do. Since we read a nonzero voltage, none of the cells have failed as an open circuit. Some might have failed as a short circuit acting as a resistor dissipating energy but not holding the charge. With this unknown, we shouldn’t charge the batteries anywhere near as fast as we could if they were known to be healthy. 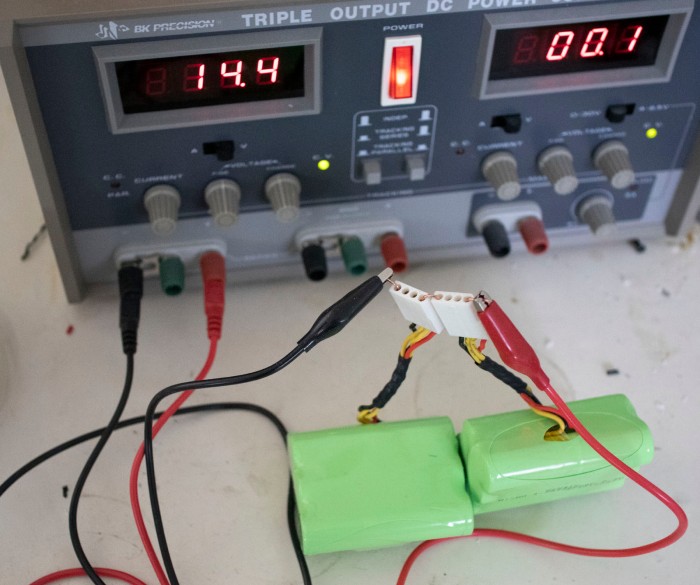 If we instantly hit maximum voltage and maximum amperage, it indicates a short circuit somewhere, possibly in a dead battery cell acting as a resistor turning that 1.44 watts into heat. Fortunately this did not happen. We hit the 100 milliamp limit immediately as expected and the voltage started rising, which is consistent with a battery pack trying to charge.

After a few minutes, we disconnected the power supply and measured battery pack voltage: they now measure a few volts, higher than before. This increased confidence that our positive/negative wiring guesses were correct and also proof at least a few cells can hold some amount of charge.

The batteries were reconnected and, for the first half hour, we periodically touched each of the cells to see if they were hot to the touch. Some of the cells were warmer than others, but none were alarmingly so. We’ll let the power supply continue slowly feeding the battery pack overnight and see how they behave.

The thrift store didn't have corresponding charger for this Neato botvac, so batteries (12 NiMH cells in series) were charged overnight with bench power supply set to 14.4V and 100 mA. pic.twitter.com/DCac1CKEIk