My Neato XV-21 vacuum couldn’t power on when I found it in a thrift store, and the problem (or at least, the first problem) was its battery pack: it could only deliver enough power to boot up the onboard computer and run it for about three seconds before its voltage dropped and the computer shut down again.

In order to assess the rest of the vacuum, I need to find a replacement power source. Since the actual condition of vacuum components are still unknown, I’m not inclined to spend money buying batteries specific to a Neato robot vacuum. The next experiment, then, is to wire up something out of batteries already on hand. I looked through my pile of batteries to see which would satisfy the following criteria:

The winner was a pair of batteries I had for my E-Flite remote control helicopter. The aircraft itself had long since been crashed and trashed, but I kept its batteries. Two cell lithium polymer batteries have nominal voltage of 7.4 volts, within operational range of 6-cell NiMH batteries. Physically they were small enough to fit within the battery compartment, but at 800 mAh their power capacity is too low for full vacuum operation. They were designed to deliver high power to fly a small helicopter toy though only for a few minutes. Ideally they can run the vacuum motors briefly to verify their operation, but mostly I just need them to run the Neato computer for more than three seconds.

To connect these batteries, I first disassembled the old tired original battery pack. Before disassembly, I noticed a rectangular bump visible in the battery pack. I had thought this was the thermistor but I was wrong. It appears to be a temperature safety fuse. There was also an over-current protection amperage fuse in the pack. NiMH cells are relatively safe but it’s still good to see additional safety measures inside these packs. 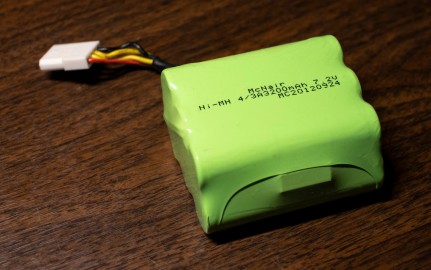 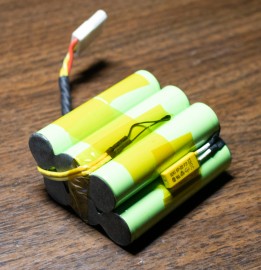 I needed the battery pack’s wiring harness for my battery experiment, so it was cut free. I kept the temperature monitoring thermistor and wired the positive and ground battery power wires to a JST-RCY connector that will mate with my E-Flite battery pack.

Once soldered, I connected the pair of batteries and plugged them into my Neato XV-21. 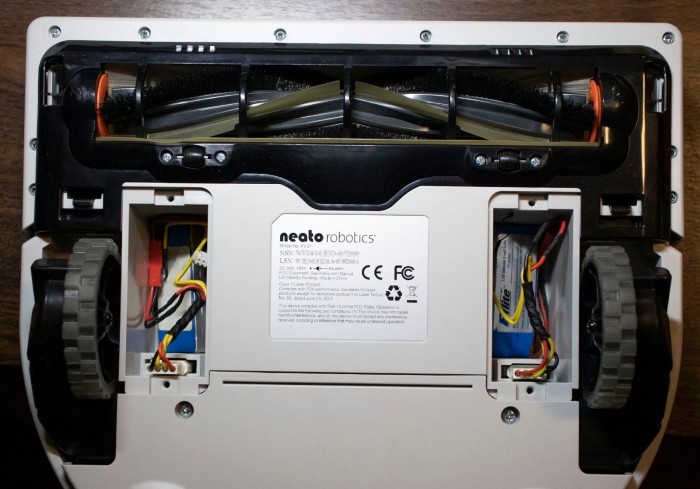 I was greeted by the same boot-up screen I saw before, but this time the screen stayed on instead of flickering off after three seconds. Now it’s time to try talking to the vacuum.

These were the two largest identical packs that I had on hand which would fit inside existing battery compartment. pic.twitter.com/YJx4rEImWd