As someone who have played with electronics modules purchased online for a wide variety of projects, I was fascinated by Google’s AIY projects a.k.a do it yourself artificial intelligence line of products. Here in the United States, Google is not doing it alone. The products themselves are not enough if it isn’t in front of people’s faces, so there was also a partnership with the retail giant Target to have these kits on the shelves of Target stores. I didn’t think there is large enough of a market for these products willing to pay the prices it would take to justify a retail presence, but I admire the willingness to put up the money for an experiment to find out.

There were two kits: the AIY Voice kit and the AIY Vision kit. The vision kit costs roughly double that of the voice kit ($90 vs. $50) but it was far more interesting with an onboard Pi camera and a TensorFlow processor designed to accelerate machine vision tasks. When the vision kit became available at my local Target, I immediately purchased one so I could play around with its default demo software. Sadly my TensorFlow knowledge is still too weak for me to make the vision kit do my own bidding.

As for the voice kit, I knew it was also built around a Raspberry Pi Zero with a hardware accessory board, but that board was focused on audio capture and playback not significantly different from a sound card. I was not aware of any audio processing capability on board, so I expected the audio to be recorded and uploaded to Google for processing. This capability was not interesting enough for me to buy one at $50.

It’s been over a year since the retail experiment began, and my local Target has marked the AIY Voice kit for clearance sale at $15 each. (I later found out Micro Center was even more aggressively clearing them out at $5 each.) I guess this means we have an answer to that experiment. I’m a little sad to learn of this, because I would have loved to be proven wrong. If there was indeed a market for a successful product in this area that would have meant more interesting products for me to purchase locally. Alas, it looks like I’ll continue to buy esoteric little electronics gadgets online.

Still, right now I could pick up an AIY Voice kit for $15. The Raspberry Pi Zero at the heart of the device has a retail value of roughly $10 all by itself. Add in the microSD card and we’re pretty close to $15 before considering the rest of the kit. I passed on the AIY Voice kit at $50, but I’m willing to buy them at $15. Worst case scenario, I will have a Raspberry Pi Zero W and matching microSD card.

Here’s what I saw when I opened the box: 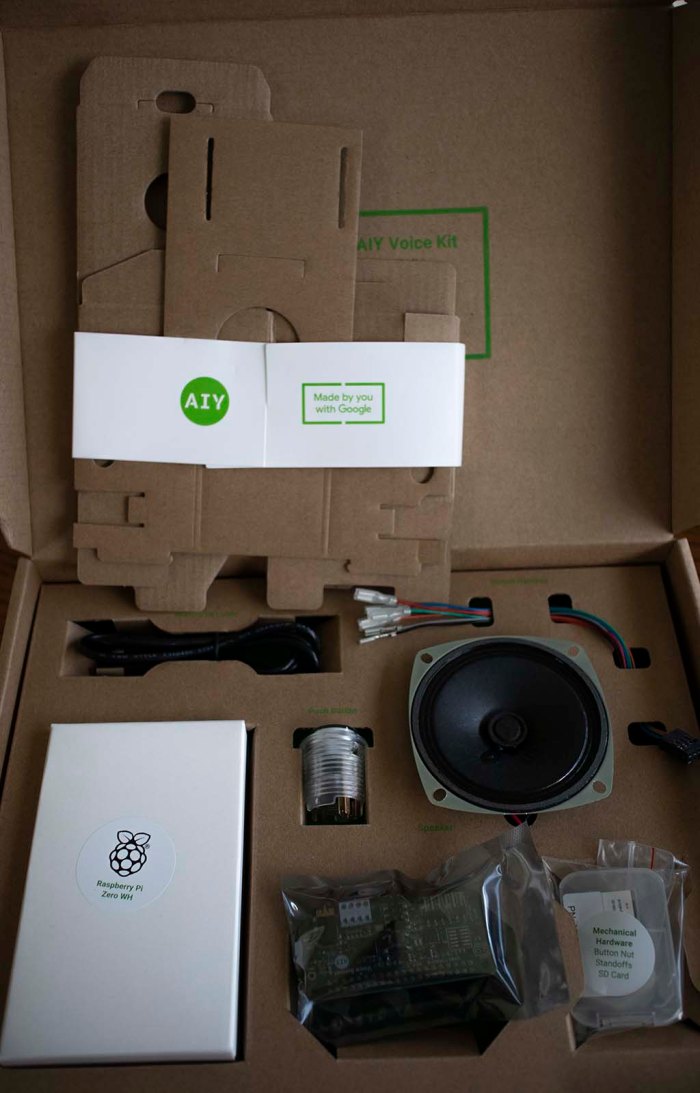 There were no surprises. Aside from the expected Raspberry Pi Zero W and microSD card, we have the hardware accessory called a “Voice Bonnet”.

The remaining hardware components are a single speaker and a big button (that turned out to have LEDs in it) and they plug into this bonnet.

Let’s see what this kit has to offer.