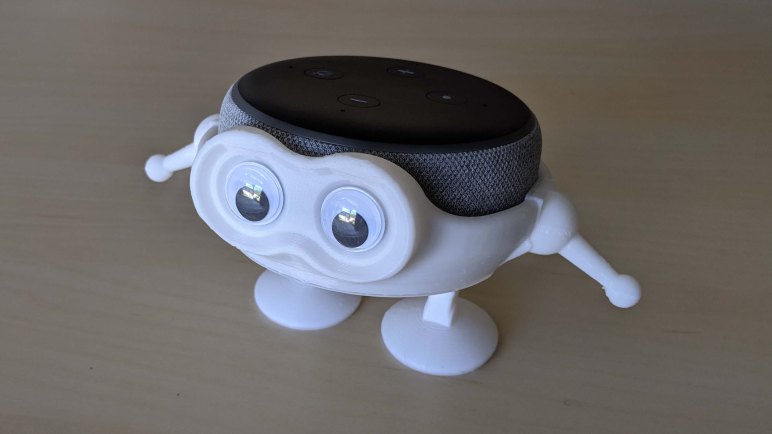 I loved the 1987 film * batteries not included. Upon the 30th anniversary of its opening, I posted to Facebook introducing the film to friends who might not have heard of it. A friend who shared my love for the film commented that the little smart home speakers look just like the baby robots in the film. Thus was planted the seed of an idea.

This past weekend there was a sale on Amazon Echo Dot (*). It brought the price tag down to $22, well into my impulse buy territory, and I decided to turn that idea into reality almost two years after the original conversation.

The project goal was to create a 3D-printed stand holding the speaker along with a pair of googly eyes. The shape will not copy any of the three baby robots, but must be immediately recognizable as a design inspired by them. I also decided to keep it simple, resist temptation of scope creep. This robot will not be motorized. It will not articulate. I wanted it to be printable on any printer without supports, so I will break up the design into a few pieces that should be easily assembled. I’m not going to put any surface details (greeble) on the robot, instead opting for simple cartoony lines.

These decisions to keep things simple made it possible to hammer out the CAD design in a single evening. The basic pieces are simple geometry on Onshape. Generous use of chamfer and fillet gave it the illusion of a more organic shape, especially in the body and around the eyes. I started printing with a small test piece to verify I measured dimensions for the speaker correctly. The first leg did not snap into place correctly and neither did the first pair of arms so they had to be revised. This is actually an unusually low number of iterations required relative to most of my 3D printed projects.

My friend Sophi Ancel who made the original comment loved the result enough to ask for a variant designed for Google Home Mini speakers that she actually owns. Giving this little Amazon Echo robot a sibling seems like a worthwhile follow-up project. For now, I’ve created project pages on both Hackaday.io and Thingiverse.