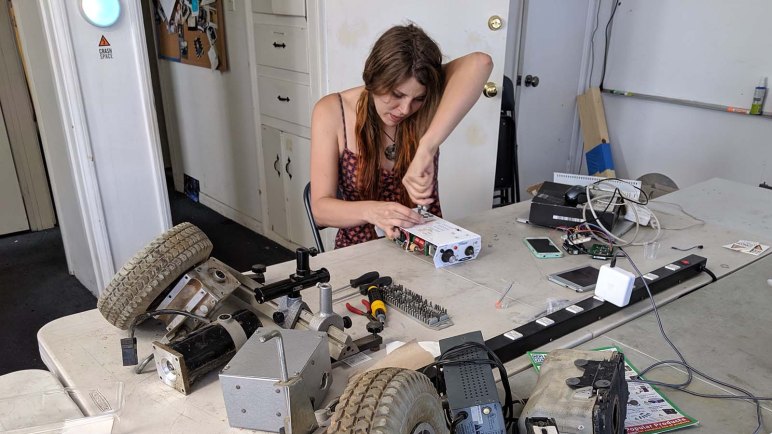 Visiting CRASH Space LA has been on my to-do list ever since I was introduced to Barb and Jay at Maker Faire 2018. We’ve seen each other at numerous events since then and it was pretty ridiculous that I see them more often in San Mateo than our home town. The problem is that they are on the far side of the basin. Going to Culver City in the context of infamous LA traffic meant a visit is not “I’ll just stop by.” It is a day trip kind of expedition! Finally Emily and I visited during their “Mega Take Apart & Swap Meet” day this month.

I brought some things but Emily brought more, and they were more interesting. She tore into some sort of retired dental surgery tool with components indicating high voltage operation. We’re not sure why a dentist would need high voltage in our mouths, and we didn’t much care. (Or chose not to think about it.) What’s inside is far more interesting.

I dug into another box Emily had brought. Some sort of power supply that had all appearance of being an one-off homebuilt project.

I guess this little guy was expected to get hot, held apart from others and granted its own heat sink. pic.twitter.com/G9rwn6qrUE

After the take-apart event Emily went off to visit friends living in that part of town. I stuck around CRASH Space for their Video Dim Sum event where I learned there are a lot of very odd things available on YouTube. I expected this, so it was a 100% success on that front. However my taste rarely aligned with the people who submitted videos so my overall entertainment-to-time ratio was pretty poor. I did learn some interesting things that I would not have otherwise, so it was still a fun thing to try at least once.

Out of all the videos that were shown, just one of them were memorable and compelling enough for me to go find and rewatch. Here it is, my personal winner of Video Dim Sum: