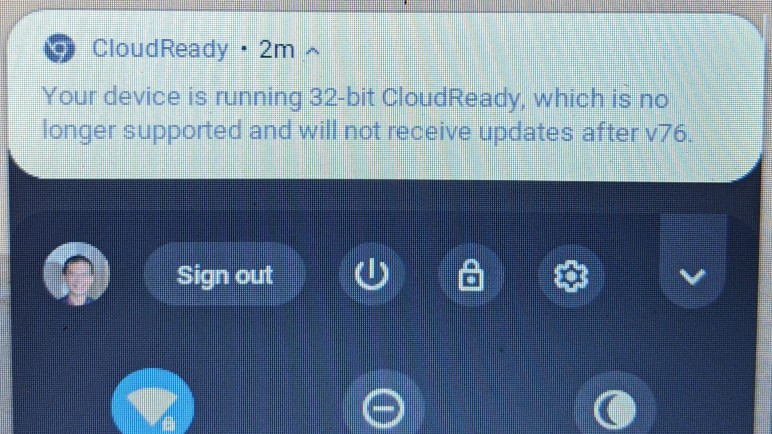 After a ~10 year old netbook was upgraded with a solid state drive, we can now confirm the hard drive is not the only thing holding back performance. The following experiments indicate the old Atom CPU at the heart of this machine lacks the power to run any modern operating system graphical user interface.

First up at bat was Ubuntu Desktop 16.04 i386. It ran sluggishly when loading from this machine’s original spinning platter hard drive, and it was not significantly better when loading from the upgraded solid state drive. Watching the HDD activity light earlier, I thought this might be the case, but wanted to verify firsthand, which I have.

Next candidate was Ubuntu Mate, which has a 32-bit installer for 18.04. (Mainline Ubuntu stopped supporting 32-bit in 18.) Even though Ubuntu Mate advertised itself as a lighter-weight alternative to mainline Ubuntu, it was unfortunately still far from pleasant to use. But if needed, one reason to run Ubuntu Mate 18.04 is for the longer supported timeframe of Ubuntu 18. According to Ubuntu releases list, 18 is supported until April 2023.

I then tried an even more constrained operating system: install Chrome OS and make a faux Chromebook out of this thing. I had known Neverware CloudReady as a build of Chrome OS that anyone can install on an old laptop to turn it into a Chromebook. I had trouble making it work before on an old machine before, and wanted to try again.

I noticed the minimum recommended amount of RAM has increased as I remembered it was 1GB, now it is up to 2GB. But that was just a recommendation and I was able to load CloudReady on this netbook with just 1GB RAM. Once launched and running, CloudReady proved to be about as sluggish as Ubuntu Mate 18.

But that’s not the biggest problem:

CloudReady, originally advertised to help give old machines new life, has been forced to leave 32-bit CPUs behind. After seeing this notification I went online to find their announcement, as well as confirmation that Chrome OS v76 was about the right vintage for this to happen.

For interactive graphical desktop use, it really doesn’t get any more lightweight than Chrome OS and this machine still struggles. It looks like we need to fall back to a text-based server edition of operating system software.

[UPDATE: I found an even lighter weight distribution of Linux for old 32-bit x86 machines that would be familiar to users of the Raspberry Pi.]