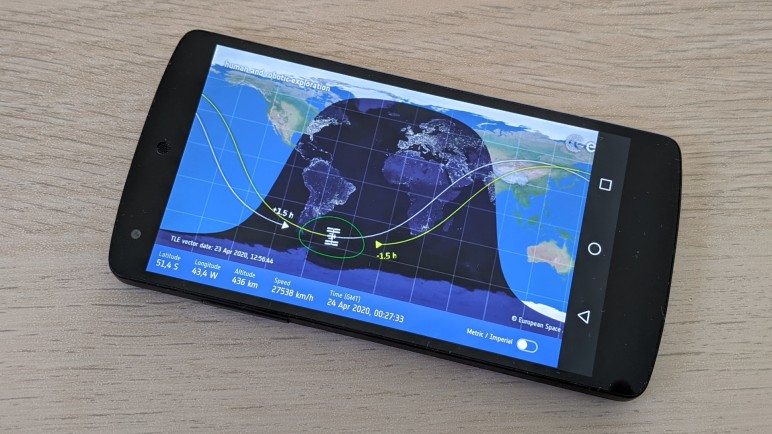 When I tried a Nokia Lumia 520 to see if I could use it as ESA ISS Tracker display, I found its screen couldn’t quite manage. Displaying the entire map in a clear and legible way requires more than the 800×480 resolution of a Lumia 520’s screen. Which led to the next experiment: dust off an old Nexus 5.

Nexus 5 Android support was discontinued several releases ago, but when new it was quite a compelling device. One of the signature features was a full HD 1920×1080 resolution screen packed into just five inches of diagonal length. And given Google’s track record of mobile Chrome browser, I was confident it would be capable of rendering ESA’s HTML ISS tracker.

Unfortunately it proved to be even less suitable than the Lumia 520, due to the lack of hardware navigation buttons. This meant the Android navigation bar is always on screen, obscuring part of the map. This was similar to how a Kindle behaves, except the Kindle bar is across the bottom while the phone is over on the right.

Another problem shared with the Kindle was the inability to keep the screen on. Screen inactivity sleep timeout could be set anywhere from 15 seconds to 30 minutes, but there isn’t a “Never” option like there is on Windows tablets or Windows Phone. It seems to be a persistent trend in Android devices, which is reasonable for portable personal electronics but annoying when I want to repurpose one as an around-the-clock status display. Android being Android, there’s probably a way around that limitation, but that’s not a very interesting project right now when I already have more cooperative devices at my disposal.