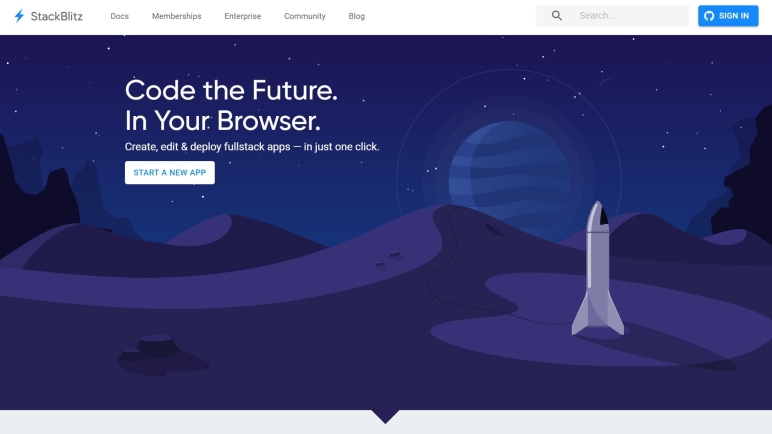 It’s always nice when the team behind a particular piece of software put in an effort to make newcomer introduction easy. Part of Angular’s low-friction introduction shopping app tutorial is letting us learn Angular basics without installing anything on our development machines, by using the web-based development environment StackBlitz. After I used it for the Angular tutorial, I took a quick detour to learn a bit more about StackBlitz to see what else it might be useful for.

According to the StackBlitz announcement post in 2017, its foundation is built from components of Visual Studio Code but transformed to be accessible via a browser. Behind the VSCode-based UI is a big pool of virtual machines spun up on-demand to support front-end web development. StackBlitz started with support for Angular and React, and more have been added since. Plus a beta program for full stack development so their ambition is still expanding. These virtual machines perform code compilation and also a web server to host the results. These servers are public by default, so developers can check how their results look on a cell phone, on a tablet, etc.

But while StackBlitz gives us online compute resources, their generosity does not extend to online storage. Their “tight GitHub integration” is another way of saying all our project code must be stored in our GitHub repositories. If a user is not willing to enter their GitHub credentials, their work only lasts until they disconnect and the virtual machines are shut down. Since I’m squeamish about spreading my GitHub credentials any more than I absolutely have to, this meant abandoning my Angular introductory app once it was complete.

That was the biggest damper on my enthusiasm for StackBlitz. If it weren’t for that bit of security paranoia, I would consider it a good replacement (at least, for the supported types of projects) for Cloud9 which used to be another free online development environment. Unfortunately, after Cloud9 was acquired by Amazon, using Cloud9 is no longer free. Even though Cloud9 is still very affordable in absolute terms (doing my LRWave project on Cloud9 only cost me $0.43 USD) there’s a huge psychological gap between $0.43 and free. Will StackBlitz lose its free usage in the future? Probably. Money to pay the bills for those virtual machines have to come from somewhere.

If this freebie goes away, so be it. It wouldn’t be the end of the world for the average Angular developer because the primary usage scenario is still centered around installing the tools on a development machine.