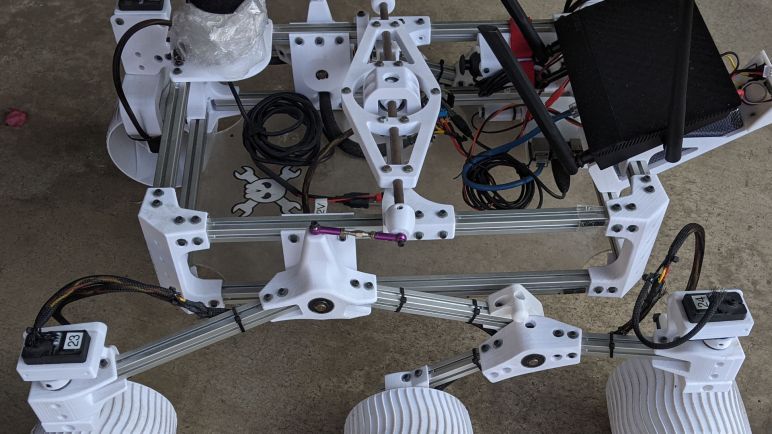 I wanted keep the barrier of entry for Sawppy low. Make it accessible to rover fans worldwide. In hindsight a few of the tradeoffs I made for this goal did not pan out. Some of these were a consequence of wanting to make sure Sawppy could be built with only handheld tools. It turns ensuring proper shaft alignment requires a drill press. A drill press is also potentially useful for greatly simplifying Sawppy construction.

There are a lot of M3 fasteners used all over Sawppy. Literally hundreds of M3 bolts, nuts, and washers. The original idea was to have a system that allows for easy experimentation. M3 nuts can slide all along these extrusions, allowing rover builders to experiment with different suspension geometries and attach modifications. But in my own experience, having so many fasteners made every modification a huge hassle. Even changing one little thing might involve tens of fasteners. The tedium of tending to those fasteners discouraged me from doing as much experimentation as I originally thought I would, defeating the original intent.

There is another approach to building with extrusion beams, and that is to drill holes for larger fasteners to pass through the hole to a nut or something on the other side. There are two downsides to this approach. The first is loss of flexibility as the hole position is permanent. The second is that drilling a hole through the center of an extrusion beam requires holding the drill bit steady even as it catches on the edges of extrusion rails. I have never successfully done this with a handheld drill, I could only do it with the help of a vise holding the extrusion beam in place under a drill press.

So I avoided this construction method because I didn’t want to require people to have access to a drill press and vise. In light of my experience to date with Sawppy, however, I have changed my mind on this topic. While imposing a drill press + vise requirement would push Sawppy out of reach of some hypothetical aspiring rover builders, I noticed that almost every Sawppy builder I’ve corresponded with have such access and it wouldn’t have been a barrier for them. As for the people that don’t have access to such equipment, they still have the option of building Sawppy V1.

Given that I’m reconsidering how Sawppy components will fasten to extrusion beams, it is also a good time to think about the beams themselves.