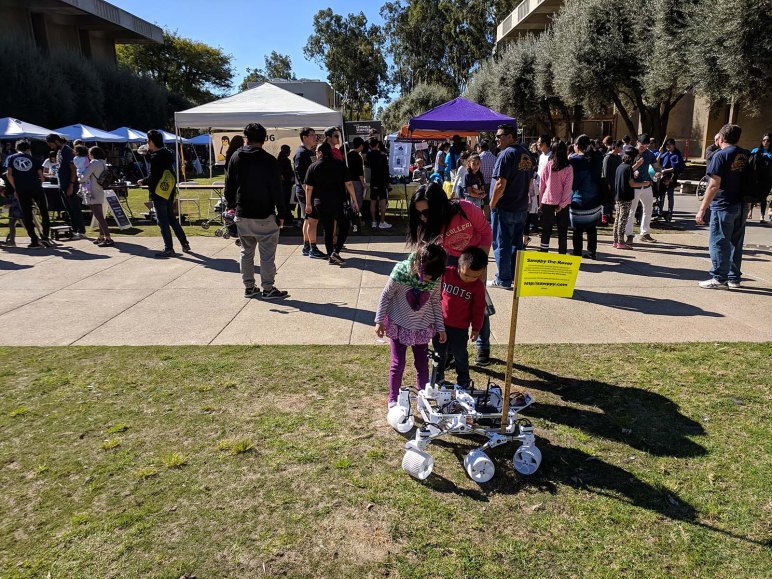 Sawppy was designed to be a motorized scale model of Mars rover Curiosity and Perseverance that faithfully replicates their rocker-bogie suspension geometry and articulation, which is really cool for rough terrain but overly complicated for flat ground. Sawppy also have wheels heavily inspired by Perseverance, which is designed for Mars but rather less great here on planet Earth.

Rolling around on those wheels is a signification deviation from source material. Sawppy crawls around fairly slowly, just under 40 centimeters per second. This is roughly the speed of a toddler learning to walk. But even that is far faster than scale speed. Curiosity has a maximum speed of four centimeters per second (0.144 km/hr or 0.089 MPH.) Sawppy is roughly quarter scale, so matching scale means rolling with a maximum speed of one centimeter per second, just barely faster than a snail. On Mars there’s not much of an incentive to hurry and the robot explorers can take their time. Here on Earth we have no patience for that kind of speed and hyperactive kids would quickly lose interest.

The target speed is also reflected in the suspension geometry. A Mars rover would never go fast enough to catch some air, and thus would not need the ability to absorb impact of landing. My Sawppy going 40 cm/s is not a lot of stress, but anyone hoping to build Sawppy into a high speed dune buggy will be sorely disappointed. Bob Krause of Inventor Studios coaches a FIRST Robotics team, and they investigated adapting Sawppy to be their competition robot. Given the drastically different design constraints between Mars exploration and FIRST Robotics, they concluded this suspension design is the wrong choice for a competition where speed is essential, and I agree.

Because for all practical purposes, Sawppy’s “40X scale speed” is still too darned slow. The speed is fine when I’m doing something like casually cruising a Maker Faire looking at all the exhibit booths. But if I am on a schedule and have somewhere to be, I end up picking up Sawppy to carry by hand.