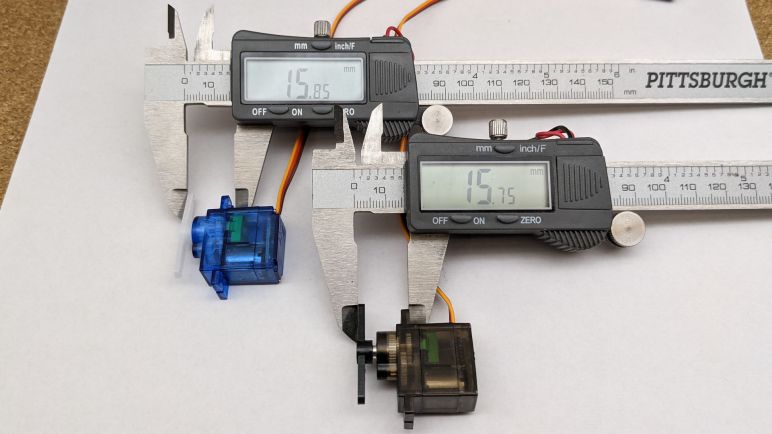 I had toyed with the idea of 3D-printing parts that would bolt directly onto a micro servo’s output shaft. But after studying the variation in output shaft dimensions from a few different batches, I’ve changed my mind and plan on using the servo horns that come bundled with each servo. These horns will have the best chances of fitting and matching properly.

Even though these servo horns are all plastic, there are differences beyond cosmetic color: they also vary in thickness and strength. Servos sold under the MG90S category usually (but not always) have stronger servo horns than those sold under the SG90 banner. Here I am pushing two servo horns against each other and we can see one deflects much more easily.

The next challenge is the variation between their shapes. All of these micro servos came bundled with three horns, featuring one, two, and four protrusions from their center hub. The smaller protrusions found in the four-point version seem to match, but they wouldn’t have much leverage. I wanted to use the larger protrusions, but here we see variations as well. There appears to be at least two popular profiles, with slightly different shapes, lengths, and number of holes. I don’t know the history here, but I assume there were two popular types at one point and these generic models copy them both. Lacking names I will just refer them as SIX and SEVEN after the number of holes in each profile.

It would be convenient if the holes on SIX lined up with the first six hones on SEVEN, but no such luck. They have slightly different spacing. It also seems popular to have both profiles represented on the four-protrusion variant of the servo horn, making it asymmetric.

This particular SG90 servo has the asymmetric four-protrusion design, SIX on the right and SEVEN on the left. The two-protrusion design is symmetric with SIX on both left and right. For the smallest horn, it decided to go with the SIX profile.

This particular MG90S made similar choices for the two- and four-protrusion horns, but the smallest horn went with the SEVEN profile instead.

This pattern seems to hold with the servos I’ve bought to examine, but I don’t know how far to trust that observation. Are there micro servos out there with SEVEN+SEVEN for their two-protrusion horns? Are there any using symmetric four-protrusion horns? Just because I don’t see them in my batches doesn’t mean they don’t exist. This is all very puzzling to me because I’ve seen designs for 3D printed contraptions that incorporate slots in the shape of these horns. How do they account for these variations?

With all these variables in thickness, strength, shape, length, it’s not obvious how to design a rover that can employ arbitrary generic micro servos. This is a challenge to ponder.

But to end on a bit of happy news, it seems like there’s one final de-facto standard dimension that all these designs adhere to: despite the variation between servo horn thickness and mounting tab thickness, it appears that the distance between the bottom of the mounting tab to the top of the servo horn is fairly consistent. Again there’s no guarantee all the micro servos out there would adhere to this convention, but at least it gives me a starting point on mechanical design as I move on to look at the electronics within.