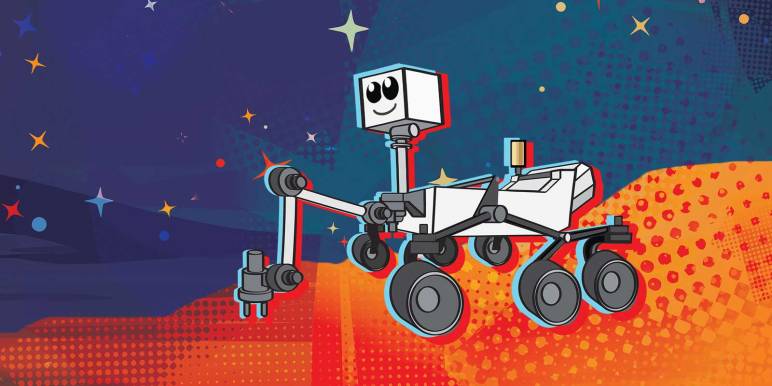 The smaller size also opened another path that I wanted to explore: not just a little rover, but a cute little rover. Sawppy mostly followed the scale and proportions of Curiosity rover. Most of the deviations came from when I made sacrifices to make parts easier to 3D print. But as soon as I saw the cute rover illustration for JPL’s Mars 2020 naming contest I knew I wanted to make a rover that willingly sacrifices scale fidelity in order to gain physical appeal. This was reinforced when I learned of ExoMy. Which took the designs of ESA ExoMars mission rover Rosalind Franklin, and turned it into a cute rover with a smiling face.

My little Sawppy rover can’t help but look cute next to a full size Sawppy, like a duckling following around mama duck. Rather than putting up any futile effort to fight it, I plan to lean into the cute angle. Aside from just the sheer fun of it, I also hope a cute appearance will make the project appealing and attract an audience who would otherwise be less interested in a mechanically faithful scale model.

From a design standpoint, this means changing around some proportion on the little rover. Adapting counterparts to traits that we humans instinctively associate with young animals. Following ExoMy’s lead, a little rover will start with the following:

But that is only a starting point, there are many other potential ideas along those lines:

I expect it’ll take several iterations before I get a decent design for a little Sawppy rover. Lessons learned and incorporated as I go, starting with prototype number one.