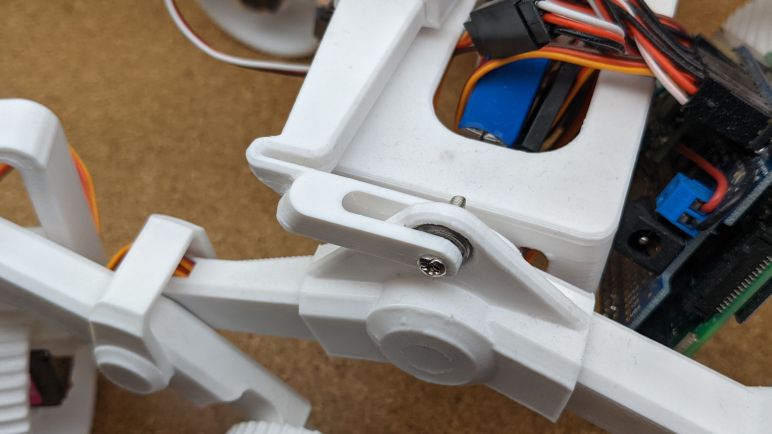 All my Sawppy rovers big and small copy the rocker-bogie suspension geometry of real Mars rovers Curiosity and Perseverance. To distribute rover weight between its left and right sides, the two suspension rockers are connected to each other via a differential bar across the top of the body. The differential bar rotates along an axis that is perpendicular to rotational axis for the two rockers, which presents a bit of a challenge to link them all together. Each link connecting the top of the rocker to the differential bar needs at least two joints, and each joint needs to accommodate motion along two axes of rotation. The translation component isn’t much, but it’s definitely more than zero and a design consideration.

To properly handle rotation along more than one axis, we need to use a ball joint of some sort. Most people’s experience with mechanical ball joints are in an automotive context, or at least Wikipedia believes that should be the default. Smaller versions made for remote-control vehicles were used by JPL’s Open Source Rover and my Sawppy V1 copied their approach. (*)

I don’t think these are rare, but I also don’t know if I can safely assume these to be widely available everywhere. Also, it’s not guaranteed to be available at other sizes, which became a problem when someone wants to build a smaller or bigger rover. It was certainly a concern when Quinn Morley wanted to build a big rover, and these links were something that had to be changed.

So following Quinn’s lead, Micro Sawppy Beta 1 (MSB1) included my first exploration to alternate approaches. At this small scale, it might be possible to ignore that second axis and use single-axis joints. We might be able to get away with letting slop in the system or flexing of structural members to absorb that motion. The latter would be a benefit of using 3D-printed plastic, which would let us flex far more than the steel and titanium used by real Mars rovers.

The differential bar of MSB1 incorporated the links with a small “U” section that is intentionally made thin so it could flex, a design technique called a “living hinge”. I placed that U as far away from the rocker as I could, because a longer link translates to a smaller amount of flex for a given distance of movement. The top of the rocker incorporated a 623 bearing to handle one axis of rotation, and we depend on flexibility of the plastic to absorb the other axis. For really good living hinges, we need to print with plastic designed to flex, but for small movements like this we might be able to get away with the typical PLA or PETG printed plastics.

The experiment appears to have worked to some degree as visible in the short drive video posted to Twitter embedded above. The rocker-bogie suspension was able to perform its duty of weight distribution, and the (technically subpar) differential links posed no obviously visible hinderance to differential function. I’ll continue to iterate on this idea in future prototypes. And since the micro Sawppy line of prototypes are focused on exploring new physical form factors and associated mechanisms, I decided to reuse previously established electronics and software.