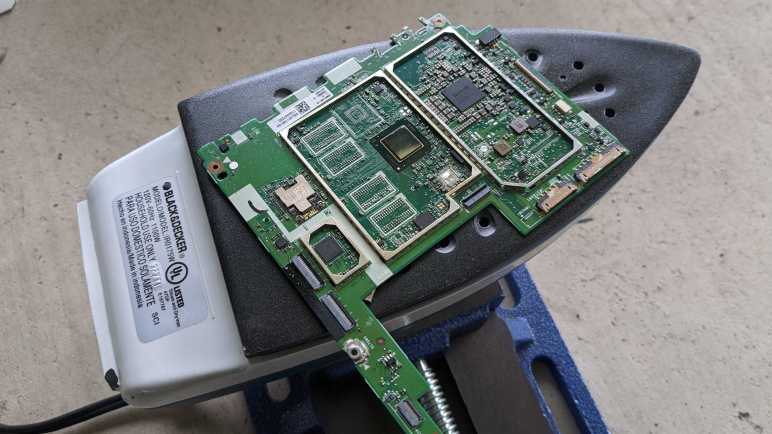 I’ve been gradually building up my skills and tools working with surface-mount technology components. After the most recent episode of frustration trying to rework components without a hot-air rework station, I went ahead and bought a simple starter unit on Amazon. (*) This is quite similar to the hot-air rework station I got to play with earlier, and I’m operating under the assumption that something simple is far better than nothing at all. It is certainly less destructive than the blunt hammer of a paint removal heat gun. Using my new hot air rework station, I was able to salvage more red LEDs from my pile of salvaged electronics and install them on the Mr. Robot Badge. The job is a lot easier once I had the right tool! The result is not quite perfect, because my salvaged LEDs are slightly different shade of red and a touch dimmer, but it is running and it’s all red.

Hey, I have one of those “SMT stations” too! In my pile of household appliances awaiting teardown is a retired clothes iron. Something is wrong with its temperature regulation circuit. It would heat up to the requested temperature then turn its heater off. But then it would cool far more than acceptable before it would start heating back up again, and it never heats all the way back up to the requested temperature before turning off again. In short, it was no longer useful as a clothes iron and I thought I’d take it apart eventually. Due to my confusion when looking at a simple coffee maker circuit, I’m not optimistic I could fix the iron, it was just to see if I could learn anything.

But now I have something else I can do with it instead of taking it apart. Reading the rest of the above Twitter thread, I confirmed my understanding that unmodified clothes irons do not get hot enough to melt solder by themselves. What they can do is assist the hot air gun by keeping the working area warm. This helps the hot air rework station work better by reducing the amount of heat dissipated away uselessly.

So I set up my own “SMT station” and placed upon it the mainboard from an old retired Roomba Red. The proprietary CPU (or at least customized enough to have an iRobot logo on it) was too big for me to remove with the hot air station alone, but with the iron keeping the entire circuit board warm, I was able to melt the solder and remove the chip intact. There’s a small chance this chip is still usable, not that I plan to do anything with it.

Also, the same temperature regulation problem that made me retire this iron also made it bad at maintaining circuit board temperature. I can work around it by unplugging the iron and plugging it back in to reactivate that initial heating period. Far from ideal, but good enough for today’s learning exercise.

Then I revisited my previous hot air experiment failure: the CPU from the mainboard of an Acer Aspire convertible Windows tablet. This time I was successful! Sort of.

It was far more difficult to remove than the Roomba CPU. I damaged a corner of the module with my tweezers by yanking too hard, it’s been bent upwards so definitely destroyed. But this was great practice and I’ll keep at it as I do my teardowns. Eventually I’d like to reach a point where I can salvage and reuse something more complex than a LED.