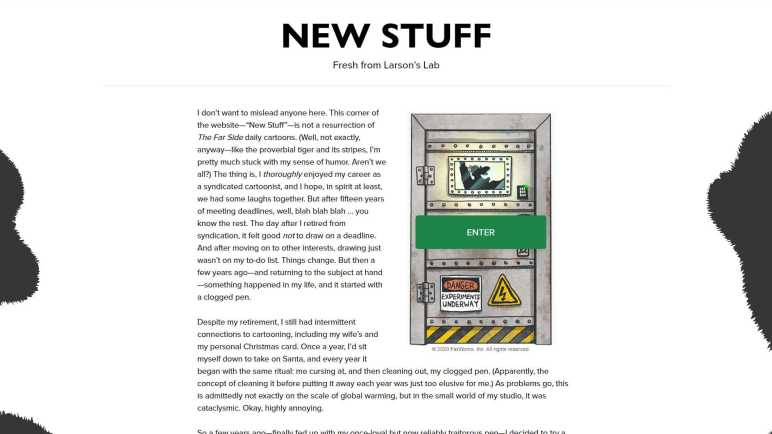 A few weeks ago I picked up a graphical drawing display to play with. I am confident in my skills with software and knowledge of electronics, but I was also fully aware none of that would help me actually draw. That will take dedication and practice, which I am still working on. Very different from myself are those who come at this from the other side: they have the artistic skills, but maybe not in the context of digital art. Earlier I mentioned The Line King documentary (*) showed Al Hirschfeld playing with a digital tablet climbing the rather steep learning curve to transfer his decades of art skills to digital tools. I just learned of another example: Gary Larson.

Like Al Hirschfeld, Gar Larson is an artist I admired but in an entirely different context. Larson is the author of The Far Side, a comic that was published in newspapers via syndication. If you don’t already know The Far Side it can be hard to explain, but words like strange, weird, bizarre, and surreal would be appropriate. I’ve bought several Far Side compilations, my favorite being The PreHistory of The Far Side (*) which included behind-the-scenes stories from Gary Larson to go with selected work.

With that background, I was obviously delighted to find that the official Far Side website has a “New Stuff” section, headlined by a story from Larson about new digital tools. After retirement, Larson would still drag out his old tools every year to draw a Christmas card. A routine that has apparently been an ordeal dealing with dried ink on infrequently used pen. One year instead of struggling with cleaning a clogged pen, Larson bought a digital drawing tablet and rediscovered the joy of artistic creation. I loved hearing that story and even though only a few comics have been published under that “New Stuff” section, I’m very happy that an artist I admired has found joy in art again.

As for myself, I’m having fun with my graphical drawing display. The novelty has not yet worn off, but neither have I produced any masterpieces. The future of my path is still unknown.