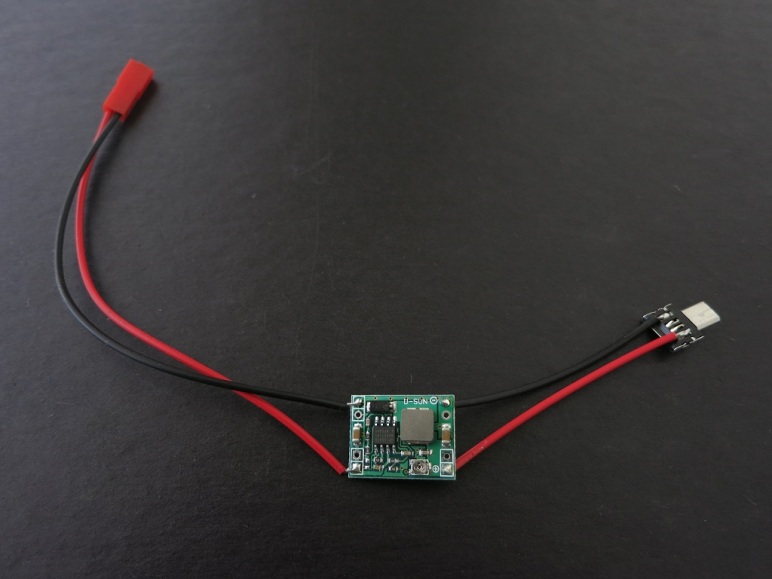 The Raspberry Pi 3 is a very impressive piece of hardware for the price, but it has its flaws. One challenge is supplying power to a Pi 3. Like all the Pi boards, power is supplied via a standard micro USB plug. This implies the Pi only needs USB level power with its specified maximum of 0.5 amp @ 5 volts = 2.5 watts. In reality, this USB port is abused beyond the specified range. The Raspberry Pi foundation recommends the power supply for a Pi 3 should supply up to 2.5 amp @ 5 volt = 12.5 watts. Five times the USB specification maximum.

None of the USB power sources I already had could handle this workload. I originally had ideas about running a Pi 3 off of a portable USB charger, but that failed under the vastly greater power draw. I went looking online for solutions.

I needed an efficient DC to DC voltage regulator that can handle the maximum power draw of a Raspberry Pi 3 without consuming a lot of power itself. Since the voltage of a battery changes as it drains, the converter needs to handle a range of input voltages while holding the output voltage steady.

The MP1584 chip from Monolithic Power Systems fit the bill, but I didn’t want to deal with a tiny surface mount IC, nor do I have the skill to design the supporting circuit required. Consulting with a few electronics hardware hobbyists, I got the recommendation to take the reference design out of the datasheet and build that.

And then, an even better recommendation: If it’s a popular chip, and its reference design is good enough, somebody would have mass-produced it and put it on Amazon. And indeed, they have (*). A lot of vendors, in fact, from all around the world.

I scrolled through a few of the listings but didn’t really have a good feel on how to judge one vendor against another. So I took the easy way out: I clicked on the “Amazon’s Choice” link to this offering (*).

Once the module arrived, I soldered battery connectors to the input and a micro USB plug to the output. I adjusted the output voltage to 5 volts, and connected everything to power up my Raspberry Pi 3.

So far it has worked very well. The Raspberry Pi 3 stayed running through tasks that demanded extra power, that would previously trigger a low-power brownout with my existing USB power sources. The output voltage held steady as the battery drained.

Functional, inexpensive, and I didn’t even have to deal with surface mount components! This was a win.

[UPDATE: Need more power? I found another regulator module (*), this one advertises a higher capacity of 5 amps. I successfully used it in my LED project “Glow Flow”]