Design for Sawppy the Rover started, just as SGVHAK rover before it, from the ground up with wheels. Once there was enough confidence we have the wheels to make a successful rover, design work proceeded upwards to the bearing system we’ll use to support the rover’s range of motion, and now we look at the steering knuckle that will hold the corner wheels while they steer. 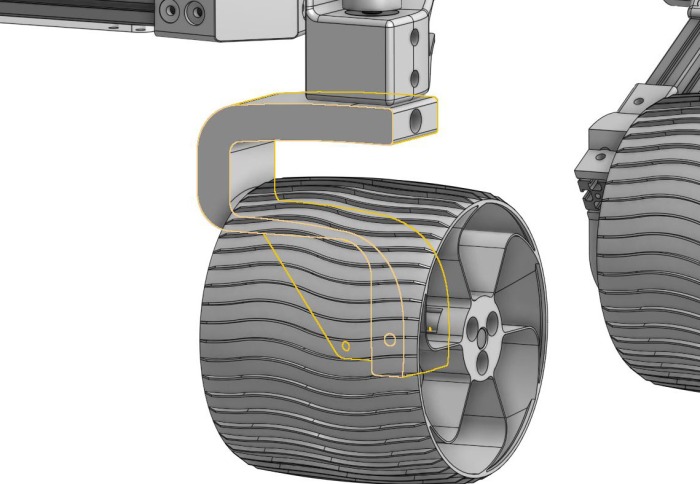 Design for this part is complicated by our desire to keep as much of our wheel mechanism inside the wheel as possible. Fewer protrusions from the wheel means fewer rocks and other things to collide with as the rover rolls along. The final design ended up looking like a question mark. Starting from the steering joint, sweeping to the inside of the wheel, then curing towards the outside again to hold wheel bearings while making as much room as possible for the servo motor driving the wheel.

When designing a part to be 3D printed, an important consideration is which way to orient the print layers. A print is strongest when forces are handled along the print layer because the adhesion between layers is usually what breaks first. (Similar to how wood grain works.) For this steering knuckle, there was no obvious right answer. Load comes from several different directions: The wheel axle from below, the steering joint from above, and weight of the rover in between held by its awkward shape. None of which apply force in the same direction as any of the others.

Orientation will thus necessarily be a judgement call making it strong in one axis at the expense of others. The final decision ruled in favor of making the part strongest for handling rover weight, we’ll leave our bearing & shaft assembly to help handle the wheel driving and steering forces. Concern about strength has already proven to be a real issue, as shown by this crack in a knuckle right next to wheel drive axle bearings.

Fortunately the rover was able to continue running in this state, but it does pretty clearly tell us there’s still room for improvement here.

And this is only one of the many problems involved in designing this steering knuckle. Building these knuckles, testing them, and fixing the problems that were exposed, meant there were a lot of iterations of steering knuckle designs.