The April 2018 Third Thursday SGVHAK Meetup was a big day for Sawppy the Rover. It was the day a backpack full of 3D printed parts and a stack of aluminum extrusion beams met to take the shape that would become Sawppy.

At the beginning of the evening, Sawppy’s left-side rocker-bogie was fully assembled. This earlier assembly gave first hand physical feedback that its component pieces were overbuilt. The right-hand side suspension adopted the slimmed-down revision so we can compare side by side after the printed parts are assembled. The main body box and differential connecting the two sides were in a similar state – printed parts awaiting assembly.

[mle_makes] volunteered to help with assembly and the two of us started putting Sawppy together while chit-chatting with everybody else at the SGGHAK meet. Some of the discussions were motivated by people looking over the rover’s design and construction technique, and the positive feedback was a major encouragement for me to write it up for Hackaday.

Several hours of assembly later, we could definitely see the outline of a rover but the night was winding down and people started talking about leaving but not everything on the rover was buttoned up yet. It was close – we could taste it!

In order to show off to everyone who attended the meet, as well as letting [mle_makes] get some satisfaction for an evening’s worth of work, I decided to push the remaining assemblies together hoping they’ll stay together just by friction. It worked… somewhat. People at the meet got a lot more interested when they could see the rover in assembled state, even if it’s just loosely held together and has a tendency to fall apart every few minutes. 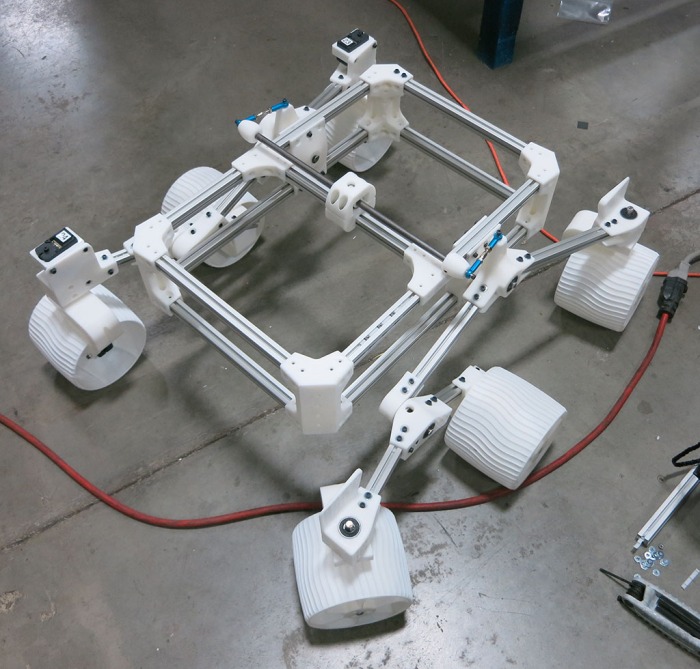 There are still a few more hours of physical assembly remaining before Sawppy can really stand on its own six wheels, but that milestone isn’t far away.

Tonight at the maker group, another rover was assembled, we looked at some unfinished delta 3D printers, and a cat friend hung out. His name is Short Tail because he has a short tall. #instamaker #makerspace