I know nothing about the band KISS or their music, but I have a PCB of Tindie puppy heads styled after stage makeup for the band. I wanted something to practice forming shapes with copper wire, and these looked fun. After tackling Starchild and Spaceman, next up is Demon. (All names I pulled out of Wikipedia.)

The previous two were done piecemeal: I formed one piece of wire, soldered it, then formed the next piece, then soldered that. With Demon I tried to form all the wires first before I start soldering, but tracking my pieces became difficult only about halfway through. I had to move wires around to keep them out of the way of the curve I’m actively tracing, and pieces intended for soldering (shown in this picture) were getting lost among extraneous pieces that were cut off. (Not in this picture, but certainly all over my work area!)

Another experiment was to add some dimensional layering to the project. I retreated from building a full three dimensional body to a two-dimensional project, but I could still layer objects at varying heights to add a tiny bit of third dimension action. Seen here is the left hand (front-left paw?) behind/under the guitar.

As it turned out, soldering multiple pieces at once wasn’t noticeably faster than doing it one piece at a time. And there was a negative downside: since I’m not referencing the overall shape as I go, small errors in each individual piece added up as I didn’t have a chance to correct errors as I went. Demon ended up a little larger than the reference art, with a more distorted shape relative to the rest. But at least his axe looks good.

For the rest of Demon, I went back to soldering each piece as I bent them. 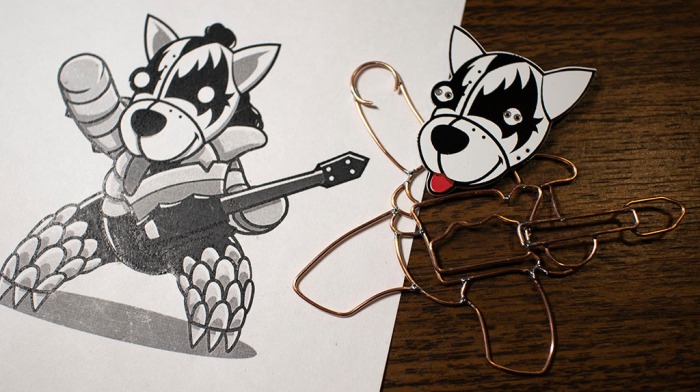