The best part of a local meetup is having different people bring in cool things that I would never have encountered in my own life. This week’s SGVTech meet is a prime example: I got to look inside an old hair removal laser. This is a product category I didn’t even know existed beforehand. Reading the product’s web site, it proclaims itself to be far more powerful than any of its competitors on the market, second only to medical grade equipment not sold to consumers. I don’t know if that is true, but power is certainly a theme. There are multiple safety hoops the consumer must jump through. A skin tone sensor in the base must verify the user’s skin color is within an acceptable range before it will even power on. And before the laser will fire, a secondary verification performed by a different sensor in the tip must pass.

The motivation for tonight’s teardown is the power subsystem. When plugged in for charging, the device gives all the indication of successful full charge, but it could never go through the first stage of its extensive power-up procedure. The manufacturer does not supply replacement batteries: while it’s possible the device is no longer safe to use beyond the life of the battery, it’s also easy to be more cynical about planned obsolescence. Tonight’s mission is to open it up and see if it can be brought back to life.

The exterior enclosure is an impressive work of industrial design, presenting a user-friendly appearance that hides the power and sophistication within. Popping a few plastic clips unveiled the device is dominated by equipment supporting a powerful laser. The battery module consumes majority of the interior volume, followed by a large heat sink and fan for thermal management.

The battery pack consists of two cells, and our first surprise was the 3.2V nominal volts listed on its label. This typically indicates lithium iron phosphate (LiFePO4) battery cells, which is known for high power delivery befitting a high powered handheld laser. However, these cells typically trade off power delivery with lower power capacity, but this pack claims 4.4 AHr which is far higher than any LiFePO4 cell I’ve seen. Tearing apart the outer plastic, we saw the pack is two cells wired in parallel, supported by measuring an open circuit voltage of 3.4. Two cells 2.2 AHr apiece is still very high by LiFePO4 standards.

We had a wide selection of battery cells we intended to try swapping in, from NiMH (visible in picture above) to standard 18650 cylindrical lithium batteries to lithium polymer packs intended for high amperage draw remote control vehicles. But before we start hooking up batteries, we should understand what power the device is looking for. So the battery pack’s wires were cut off and replaced with connectors to a bench power supply.

We expected the device to power up with the power supply set to 3.2V, the nominal voltage listed on the battery pack, but there was no response. Turning it up to 3.4V was also unresponsive. Something inside this device is looking for a very specific power profile before it will activate. This may be one of the safety hoops, but it certainly dims our prospects of getting it up and running on other batteries.

Then a mistake was made: thinking the device might be running into the power supply’s current limit, a hand reached out to increase current but instead turned the knob to increase voltage far higher than 3.4V. A component on the circuit board started glowing and smoking, leaving behind a burnt hole so we can’t even read the part number anymore to figure out what it used to be.

Oh well, so much for bringing the device back to life.

Now that it is well and truly dead, we have to abort the revitalization project and revert to our typical mode of disassembly for curiosity. The heat sink appeared to be a custom piece of machined metal, even the cooling fan might be custom due to how it clips in a way that conformed to shape of the heat sink. But obviously the star attraction is the laser assembly, and it didn’t look anything like what we expected. Behind the optical assembly we see… two pieces of golden colored metal? 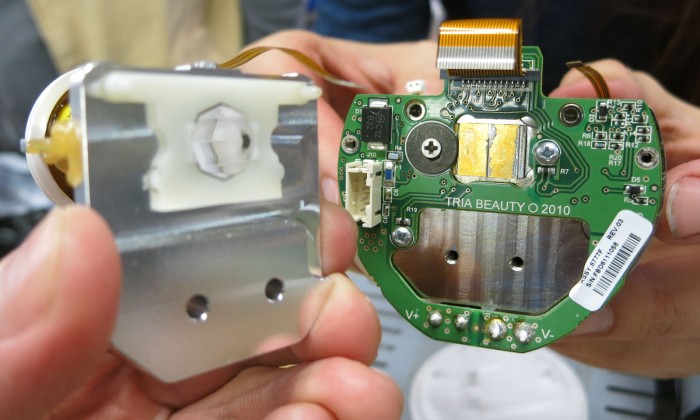 Most of our collective experience are with LEDs in plastic packaging. If we use magnification, we can see a little bit of the semiconductor within but they don’t look anything like this. Our ignorance of solid state lasers meant we didn’t understand what we were looking at.

Looking on the bright side, maybe it’s just as well we didn’t understand enough to play with it. This is a powerful piece of equipment, operating on wavelengths of light that we could not see. There is no blink reflex to save our eyesight in case of accident.

Closeup of my favorite part… pic.twitter.com/kZ8dzsdccT