I went to a thrift store to take pictures, but came home with a Neato XV-21 vacuum that did not power on. At $7.99, it was a cheap gamble to see what might be usable in this robot vacuum cleaner. In my cursory in-store examination, it looked to be in good shape. After I took a little time for a closer look, I realized it was actually in even better shape than I had initially thought. 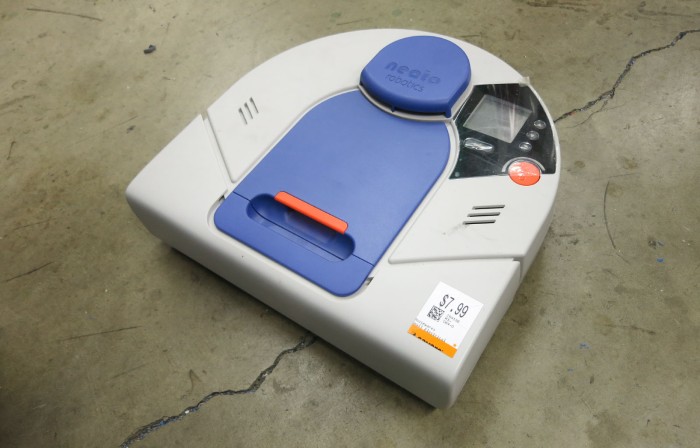 Of course, there’s no mistaking the vacuum for new. There is dirt in the dust bin and visible black smudges on top of the vacuum. But beyond that I found almost no other signs of wear. The exterior sides of this unit are clean, free of the scuff marks and other marring I associate with robot vacuum veterans. Although my experience are mostly with affordable models of Roomba and similar vacuums that perform a random walk through its environment, bumping into things along the way. The selling point of a Neato is its lidar for object avoidance, so the nearly pristine sides of may just be a result of excellent object avoidance and not lack of use.

Its floor cleaning brushes show some dirt but is actually really clean. My own home vacuum would show more dirt than this after a minute of use. Brush roller drive belt looks to be in good shape.

At this point I’m still undecided whether this was a barely used robot vacuum or maybe the previous owner is just very meticulous about keeping their tools clean. The clean brush and dust bin certainly imply the former, but the latter is also quite possible as indicated by the presence of original protective plastic over the control panel. The previous owner was one of those people who did not remove plastic protective film that were meant to be removed, a mindset very different from mine.

Me? I peel that stuff off before I start taking this vacuum apart to examine its internals.

The tab indicates this plastic was a protective sheet meant to be removed. Some people (like the previous owner of this thrift store find) leave them on. My first act as new owner was to peel it off. pic.twitter.com/LT1r23u1Li