And now, something a little different from the usual fare. Today’s teardown project has no electronics in it whatsoever. It is an exploration into an entirely different category of home consumer merchandise: furniture.

This old couch had been in service for several decades and long overdue for retirement. The default option was to treat it as bulk waste and call for pickup, but let’s see what we can learn from its deconstruction.

We start with seat bottom cushion which were easily removed. Some coins were found but there were little else of value trapped within. Too bad – we once found a lost cell phone in here, but not today. 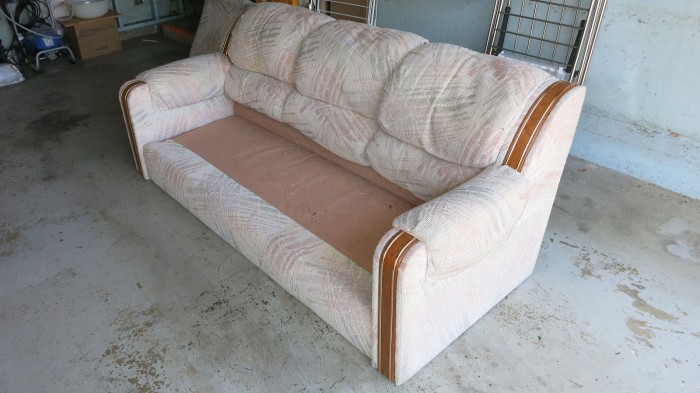 Unlike the bottom cushions, this couch’s back cushions were attached and had to be cut off for disassembly. 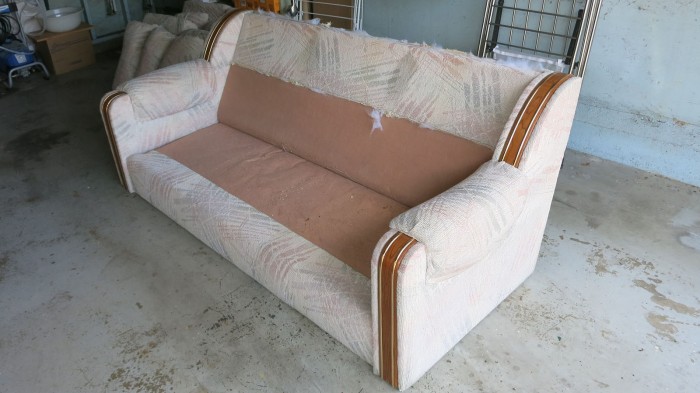 Each armrest cushion were held by four of these rivet-like structures, two inside and two outside of each armrest. It was easiest to cut fabric around each rivet than trying to unfasten them. 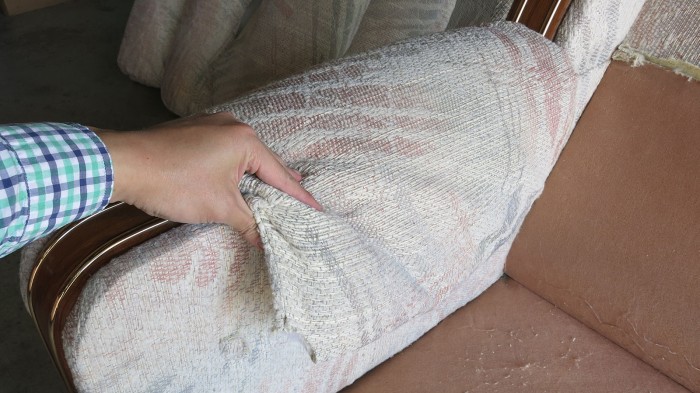 Those armrest cushions were the final pieces of soft padding material. Everything that remained are fabric and rigid structure.

Fabric panel cutting started with the bottom-most sheet. This sheet is not typically visible, made of a thin and partially transparent material that is also very tear-resistant.

This sheet was fastened by staples. The decision was made to cut instead of pull to avoid staples flying everywhere possibly puncturing tires and feet.

Seat springs were visible once that bottom fabric panel was cut away. We’ll be back for those springs later. For now focus is still on removing pieces of fabric so we proceed to cut back panel. 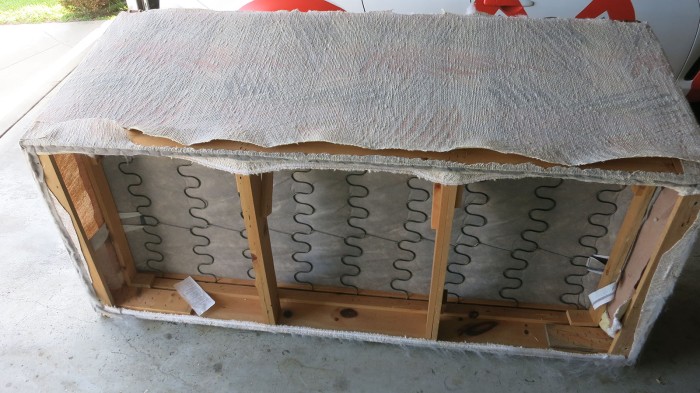 We can see more of the wooden frame once the back panel was removed. These wood beams were surprisingly irregular in their dimension. Each segment might be a little wider or thicker than its neighbors. Not that a great deal of precision was necessary – pieces were held to each other with copious amounts of staples. This construction method does not demand dimension accuracy. It’s possible this flexibility allowed the couch to be built using scrap wood left from manufacturing other things.

Cutting off the back panel also exposes these metal strips. These were used to cover up fabric seams. When installed properly, they are not visible and thus preferable to staples.

With the removal of each fabric panel, the couch looks less and less like a couch.

Returning to the bottom, a bolt cutter helps cut off the springs. With the first cut I discover they are bent in a direction to support weight. This discovery was accompanied by reinforcement that it’s always good to stay back when cutting metal things to minimize chances of injury.

By this point all loose fabric panels have been cut free, as has metal springs. Most of the remaining parts are wood and fabric glued to panels of wood. It is time for the reciprocating saw to make its entrance.

A reciprocating saw made quick work of wood pieces. A few cuts, and the couch back is gone.

After a few more cuts, the couch is no longer recognizable as a couch at all. These easily managed pieces can now be disposed as regular household landfill and do not require special bulk waste procedures. 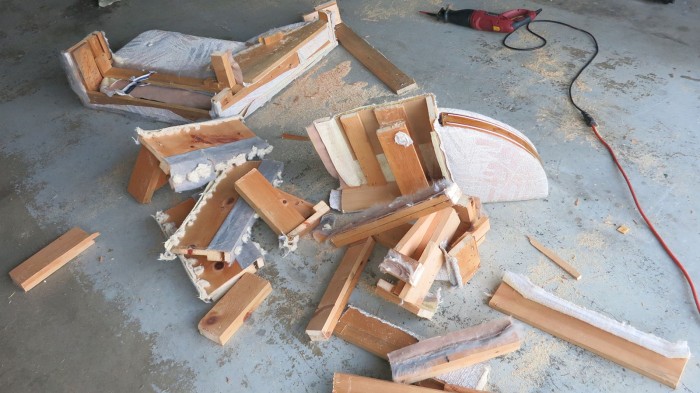