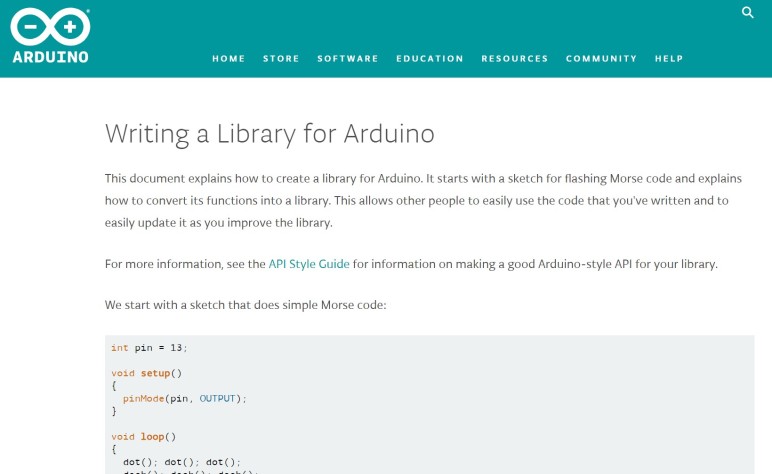 For small software projects like a typical beginner Arduino sketch, we can get away with putting everything in a single *.ino file. This was the way LewanSoul served up their Arduino sample code for controlling LX-16A serial bus servos. But as a software project grows in size, proper organization of software modules become more important.

While I don’t intend to tackle the task of writing a big Arduino sketch, I did want to get an idea of how to write my Arduino code in a way that can be reused in their own installable Arduino library. That’s a powerful part of Arduino’s software ecosystem, but I don’t want to just consume other libraries… I want to get a little practice in so I have the option to write my own libraries later.

I started by reading about the mechanics of creating an Arduino library. As expected of the world of low power microcontrollers, programming is done in C and a library has, at a minimum, a *.h header file and a *.cpp implementation file. This was all in order, an Arduino-specific twist is the IDE integration with keywords.txt. That I didn’t expect. Everything is packed in a ZIP file.

Next I moved on to Arduino’s API design style guide. This is less about the mechanical details, and more about how to structure an Arduino API. This passage caught my attention:

Some of these run counter to professional programming practice. We’re aware of that, but it’s what’s made it possible for so many beginners to get started with Arduino easily.

This might be what caused some of my irritation with Arduino code – design decisions that ran counter to my professional practice, but now I understand there’s a well-meaning reason for it.

From there reading moved to the Arduino style guide for how to structure tutorials that accompany code, then I went back to see the analog joystick tutorial I had referenced earlier, this time as an example of Arduino tutorial style.