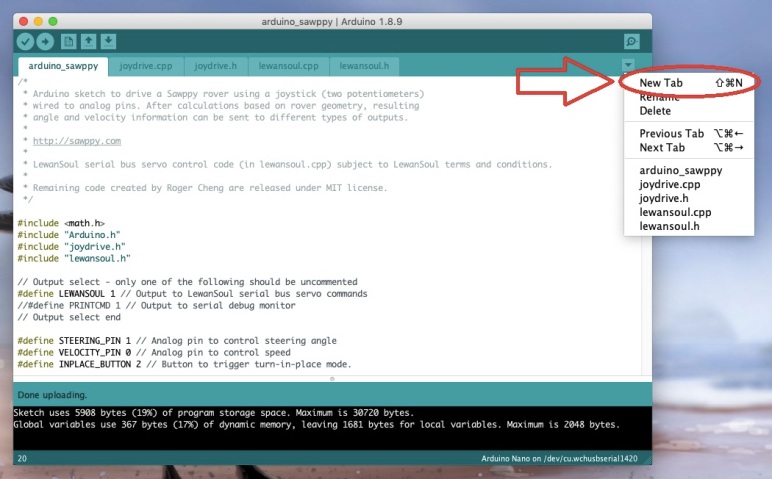 Being an electronics hardware tinkerer, there was no way for me to be ignorant about Arduino, but it never quite seemed to fit what I needed for a project: if I wanted computing power I used a Raspberry Pi, and if I wanted inexpensive low-level microcontroller I used a PIC. But I wanted to make Sawppy friendlier to beginners, and that was my motivation to finally start learning about the Arduino ecosystem.

I understand Arduino’s success is largely credited to how its creators underwent a clean-sheet examination at physical computing with the specific goal of making things easy for beginners to get started. A clean-sheet approach meant that tenure was meaningless. If the creators felt it was not helpful to beginners, it was gone regardless of whether it was a long standing tradition. I read this philosophy repeatedly as I was learning about Arduino, one example among many was this statement from Arduino API design style guide:

Some of these run counter to professional programming practice. We’re aware of that, but it’s what’s made it possible for so many beginners to get started with Arduino easily.

After I felt I had done enough reading to feel like I was properly oriented, I embarked on my project to started writing code for driving Sawppy using an Arduino. It didn’t even take 5 minutes before my well-worn habits ran into a collision with The Arduino Way. I wanted to put joystick tutorial code in its own header (*.h) and source (*.cpp) files instead of putting it in the top level sketch (*.ino) file… and I couldn’t do it.

I selected “File”/”New” in the Arduino IDE, but that created a new Arduino sketch (*.ino). I poked around in various options on the file creation dialog, hoping to see a “create new header file” or similar, but saw nothing dealing with file types. I could see how file types might be confusing to beginners, so it’s Arduino design in practice: avoid file types even if it disorients long time computer programmers.

And I was definitely disoriented. I was so stuck in my old ways I couldn’t figure out what might have replaced it in Arduino IDE. I eventually found my answer by downloading an existing Arduino project with multiple source files and opening it in the IDE: additional source files are tabs! In the Arduino IDE, a “document” is a complete sketch with all its parts. If source code is spread across multiple files on disk, they are represented as tabs when the document was opened.

So in order to create a separate set of files for my joystick code, I need to select “New Tab” and give it the filenames I intended. One tab for joydrive.h and one for joydrive.cpp.

My relationship with Arduino is off to a rocky start, but I’m sure we’ll work it out.