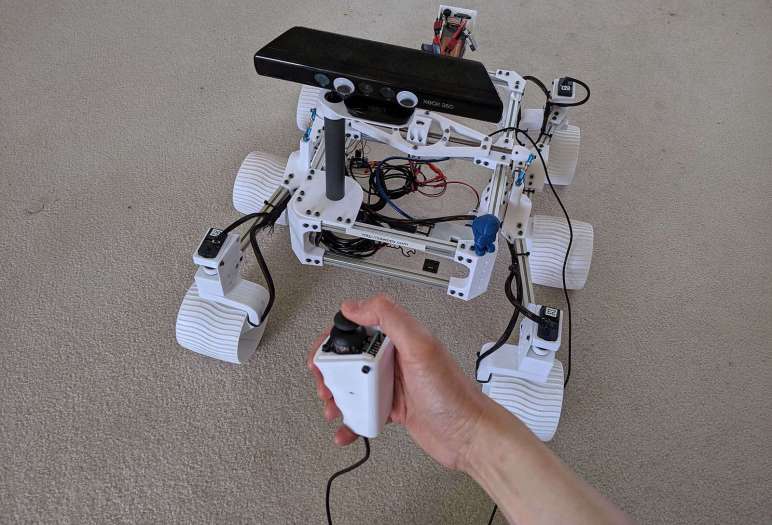 I now have a basic Arduino sketch for driving Sawppy using a joystick, I’ve built a handheld controller using an Arduino Nano and a joystick, and an input jack for interfacing with Sawppy. It’s time to put it all together for a system integration test.

Good news: Sawppy is rolling with the new wired controller! Now if there’s too much electromagnetic interference with Sawppy’s standard WiFi control system, we have a backup wired control option. This was the most important upgrade to get in place before attending Maker Faire Bay Area. As the flagship event, I expect plenty of wireless technology in close proximity at San Mateo and wanted this wired backup as an available option.

This successful test says we’re in good shape electrically and mechanically, at least in terms of working as expected. However, a part of “working as expected” also included very twitchy movement due to super sensitive joystick module used. There is very little range of physical joystick movement that maps to entire range of electrical values. In practice this means it is very difficult to drive Sawppy gently when using this controller.

At the very minimum, it doesn’t look very good for Sawppy’s to be seen as jittery and twitchy. Sharp motions also place stresses on Sawppy’s mechanical structure. I’m not worried about suspension parts breakage, but I am worried about the servos. Steering servo are under a lot of stress and couplers may break. And it’s all too easy to command a max-throttle drag racing start, whose sudden surge of current flow may blow the fuse.

I had wanted to keep the Arduino sketch simple, which meant it directly mapped joystick movement to Sawppy motion. But it looks like translating the sensitive joystick’s motion directly to overeager Sawppy is not a good way to go. I need to add more code to smooth out movement for the sake of Sawppy’s health.

Getting walked on a leash… pic.twitter.com/TH3CWCrrkv