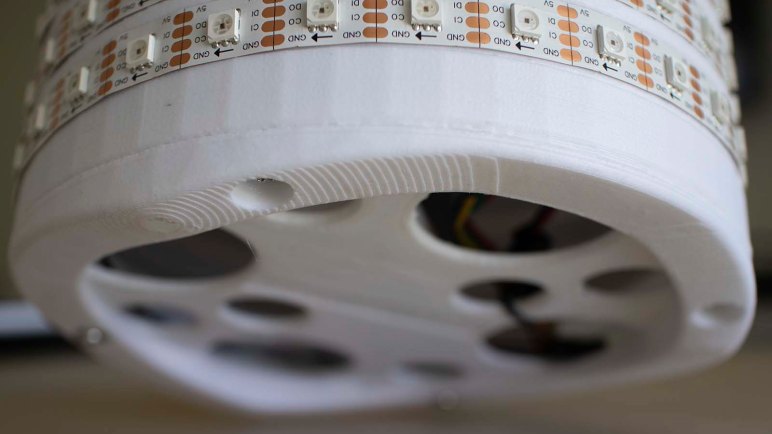 With my Pixelblaze pattern for implementing Glow Flow in good shape, attention turns from software back to hardware. First on the list is another iteration for the bottom end piece. Earlier I had installed a surplus handle on the bottom for experiment’s sake. It was a fun way to test some ideas using an already-printed piece that would otherwise have gone into the trash. But having taken the results around to show a few people, it was clear the lack of an obvious bottom to set it down was disorienting. Confused users are never good from a user experience design standpoint, so I’ll back off to a more conventional base.

With the extraneous bottom handle removed, Glow Flow sat on four screws used to fasten my existing end unit holding the USB power bank. As anyone knows, four points of contact are rarely on the same plane, resulting in a Glow Flow that rocks back and forth on three of the four screws. This had the risk of damaging the four screw heads, as well as damaging soft surfaces that the metal screw heads might scratch up.

To address this in the short term (and possibly long term) a base was designed with three blobs of contact, printed, and installed. Intending to be subtle, not calling attention to itself very much, but now it is obvious to people how they should set down Glow Flow on a tabletop. And once placed, it will stay level.

With that little annoyance out of the way, I’ll have to face a big challenge that I’ve been dreading ever since the start of this project: find a good way to diffuse my 300 LEDs so they blend together well.