Following plan for the switch test board, I crimped 3-pin JST-XH connectors on loose wires at the end of XY stage’s limit and home switches. The colors matched the wiring diagram I found in documentation, which also matched what we determined via probing with a meter. But there was a problem hiding somewhere in this system, and that’s what the test board is here to determine.

Moving the axis back and forth and watching LEDs on the test board, we eventually figured out the problem: there is a loose connection somewhere in the system. There are six LEDs on the test board, a pair of complementary LEDs for each of three switches. In normal operation we expect one of the two LEDs to illuminate. But for the homing switch, it occasionally goes dark and neither LEDs are illuminated. 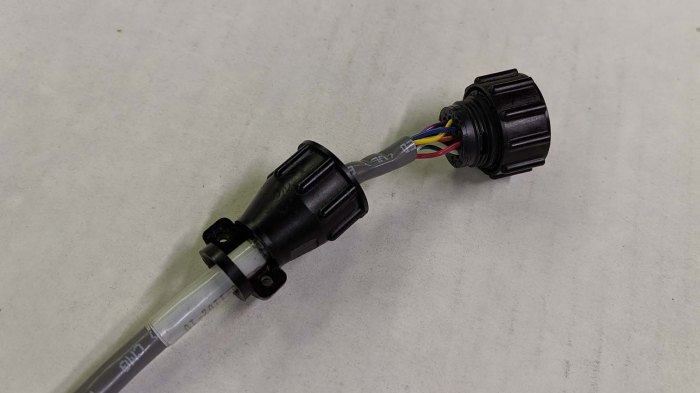 Hunting for loose connections, we eliminated the more likely suspects first (such as my JST-XH crimps) and worked our way down the list. We did not expect the strong industrial standard AMP circular connectors to be the problem, but that’s where it was: pin for the black wire, which is the common wire of the homing switch, had backed out from its proper location and unable to make a strong and reliable connection. We pushed it back into position and it seemed to stay in position. At least, for now.

With this intermittent connection, homing the machine would have been an unreliable process. It is conceivable this was the very problem that caused the original machine to be retired, but that is just speculation. With the homing switch repaired, it’s time to get back to work.