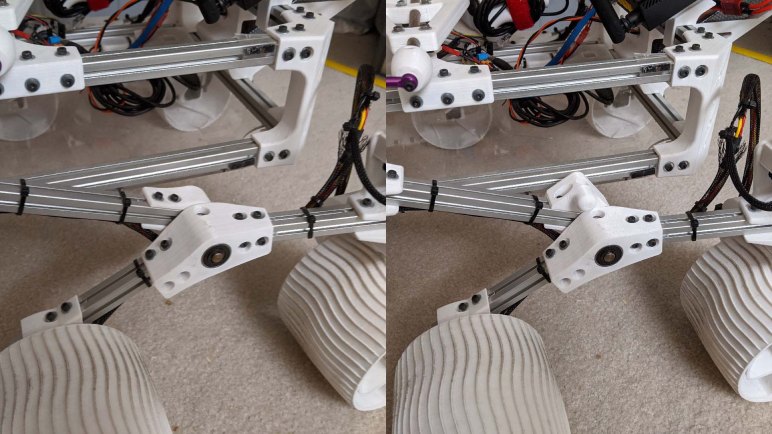 Sawppy’s appearance at LA Maker Faire was also the first public trial of the latest feature: a way to limit the range of motion on Sawppy’s suspension bogie assemblies. They were previously joints that were allowed to spin freely. I had known that the bogies shouldn’t actually turn too far, because that would break the wires running out to the wheels. But I didn’t think it would be a problem as long as Sawppy is rolling on the ground.

It turns out I was wrong. When Sawppy explores extreme terrain, it is possible for the bogie to tilt a little too far and gravity works the rest of the way and sprain a Sawppy ankle. I’m sure the actual rovers had a clever mechanism inside their bogie joint to limit their range of motion, but the details of their implementation aren’t apparent from pictures.

Ideally I would redesign both parts of the bogie joint in a way to limit their range of motion, but I didn’t want to reprint all the parts and recut a shaft just yet. For the first draft of this angle limiter, I changed the smaller part to add a nub that restricts the range of motion.

I originally wanted this nub to live underneath out of sight, but due to the angle of the suspension bogie, it turns out there’s no place for such a nub underneath if I wanted to preserve the desired range of motion. So the nub lived above as a very visible difference between it and the rovers that inspired Sawppy.

The angle limiter did function properly during Downtown LA Maker Faire, but I’m not satisfied with its appearance. The part is available directly from Sawppy’s Onshape CAD file, but I think there will be a few more iterations before I push it over to Sawppy Github.