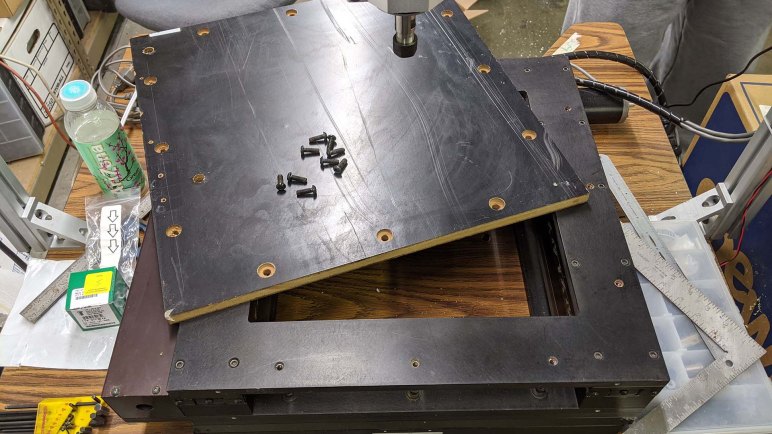 Once its homing switch was moved to the correct position, our Z-axis is ready to go to work. However, it doesn’t have a surface to work on just yet. The XY table forming the heart of this project was originally designed for the purposes of optical inspection, which meant it has a big open space in the middle for cameras and similar optical instruments to see. Big open spaces are not conducive to CNC milling operations!

Fortunately, as part of its original design, this table does have precisely placed mounting points for other equipment. These holes were, in fact, used to bolt the X and Y modules together at right angles to each other. We’ll use these mounting points to install a work surface. For precision work, we want something rigid. Ideally something just as strong as the table elements, say maybe a half inch steel plate.

But for learning purposes, we don’t need anything so fancy. We just need a reasonably flat surface we can work with. Following the theme, we’re going to re-purpose something for the task. This time, it is the main backing board for a retired home treadmill. This piece of laminated MDF had been sitting outdoors for several years and used as a ramp for moving heavy things around. The smooth laminated surface really reduced friction! But it also meant the surfaces are scratched up, and there are signs of water damage at the non-laminated surfaces. Still, it was the biggest, flattest, and most expendable thing on hand for our machine. So it was cut up with [Emily]’s table saw then 12 holes drilled on a drill press. Counter-boring those holes allows the top working surface to remain clear. We’re not worried about the cutting tool hitting one of these fasteners — they are outside of range of motion — but it allows flexibility in workplace positioning.

For our first test, we used a scrap piece of wood left from a laser cutter project and a RotoZip cutting bit. The first programmed operation will be the same smiley face test program we used before we even had a Z-axis. Whose G-code, we have now learned, never moved Z-axis at all! There are only spindle on/off codes, likely designed for laser engraving. Which also explained the speed, which pushed the RotoZip bit too fast, bending it quite alarmingly until we turned up the spindle speed. It did all right, but until we get the machine dialed in, what we really should use is a stouter cutting tool.

SGVHAK CNC router makes its first cuts. This has been @Regorlas's pet project for a couple months pic.twitter.com/PMzZjQKUPS