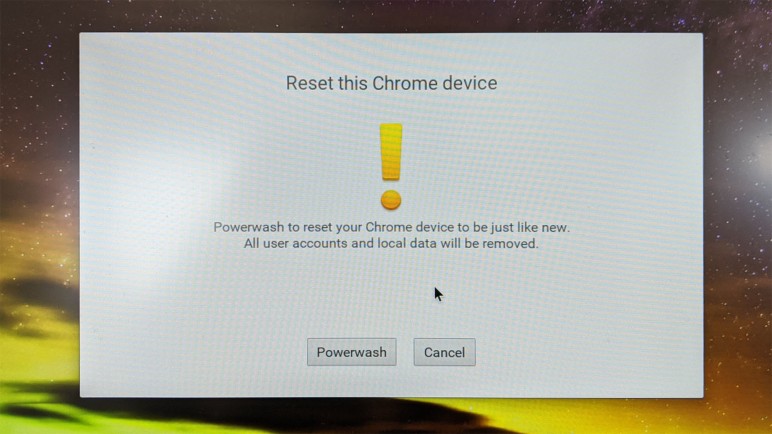 I have a Chromebook with a damaged screen. Fortunately I could connect an external monitor via HDMI and mirror the primary display. It makes the machine usable, which is an improvement, but I have to command display mirroring every time there is a change in state. I have to press the magic key combination after every boot-up, every user log-in, and every user log-out. It is rather less than ideal but at least I can proceed.

The first order of business is to erase the system. The Chrome OS login screen showed the image of someone’s Google profile. I don’t know who it is, and I don’t care. This person’s data is none of my business and, since it is a Chromebook, I know all their data is still available online with Google.

Chrome OS has a “Log in as Guest” option, which allowed me to access the system settings menu. I thought this was where a system reset could be commanded, but after coming up empty handed I went online for more research and learned a Chrome OS reset is actually triggered by a particular key combination upon power-up. I was worried the reset process would be restricted to the primary monitor, fortunately I could mirror that display to initiate the reset process which someone at Google decided to call a powerwash. Cute.

Once up and running on a blank slate, the next order of business is to update the system. There’s no telling how long it has been since this machine received a security update. 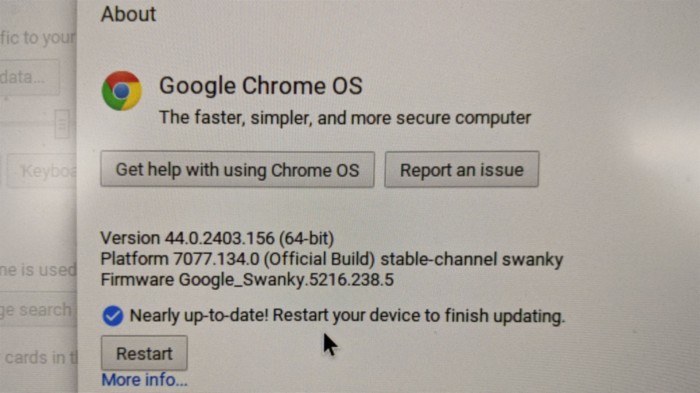 This model Chromebook launched in 2014. Chrome OS 44.0.2403.156 was released August 19, 2015. Since Chrome OS auto-updates itself, it appears this particular machine lasted less than two years in use, possibly far less, before its screen was damaged. This makes me feel bad for the original owner. 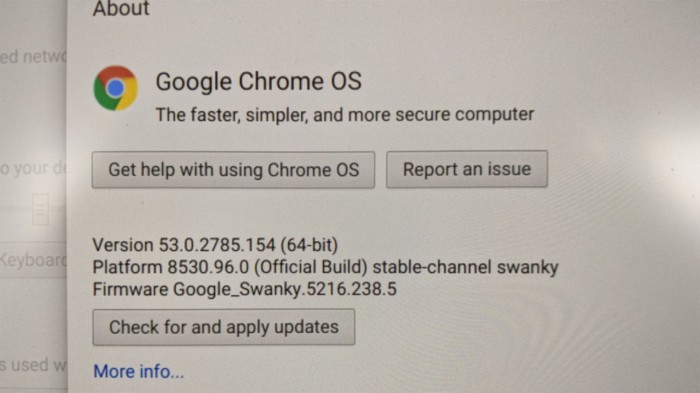 Update was a multi-stage process, I assume due to its age. I’m not familiar with Chrome OS development history but each of these steps probably transition across large architectural changes. The first round of update only took it to 53.0.2785.154 (October 2016). 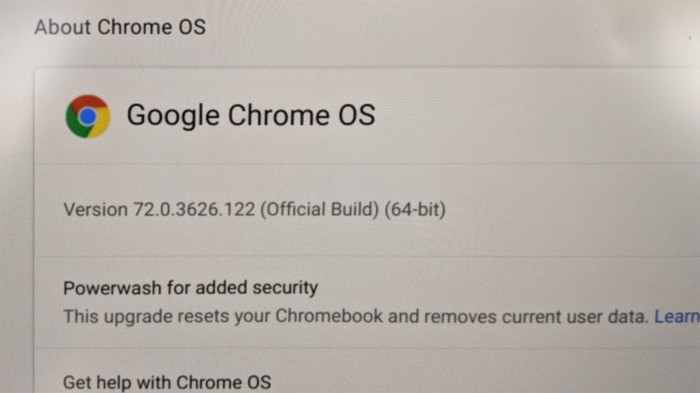 Another round brought it to 72.0.3626.122 (March 2019) This update resulted in a very different looking user interface and many items were moved around.

Yet another round of updates brought it to 79.0.3945.123 (Jaunary 2020) which is the latest available. This is a pleasant surprise, as I had not expected this device to still be supported but it looks OK on the Developer Information For Chrome OS Devices page. This model launched in 2014, and Google only guarantees Chrome OS support for 5 years, so this device is probably living on borrowed time.

We’ll worry about that later. Now that we are up and running with latest Chrome OS, time to start looking at technical information.